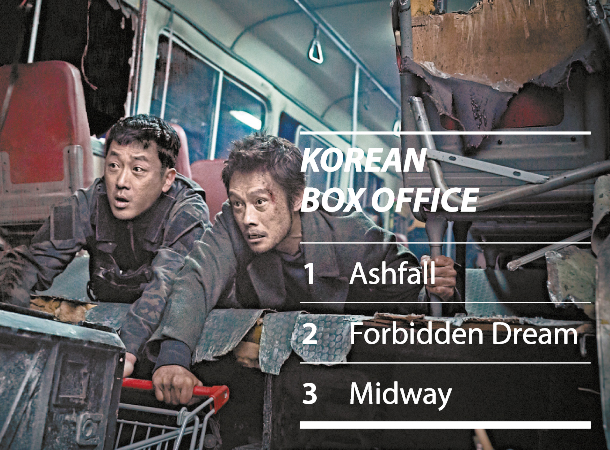 The big-budget film “Ashfall” continues to rule the local box office and was able to break even over the weekend. [CJ ENTERTAINMENT]

Dominating the local box office for the third consecutive week, “Ashfall” managed to ring in the new year by surpassing its break-even point of 7.3 million ticket sales over the weekend.

The local blockbuster was seen by 565,000 people at 1,222 screenings. The film’s distribution company, CJ Entertainment, and the directors were surely relieved to see the film surpass its break-even point, as the movie is reported to be one of their priciest yet, costing 26 billion won ($22.4 million) to make. Still, it may prove to be a challenge for the blockbuster to join the list of movies reaching the 10-million-ticket-sales milestone.

“Forbidden Dream” remained in second place, gathering a total of 343,000 moviegoers to 922 screenings. Unlike the controversial “The King’s Letters,” also about King Sejong the Great (1397-1450), the historical drama is receiving favorable reviews from moviegoers for portraying the relationship between the king and the scientist Jang Yeong-sil, played by Han Seok-kyu and Choi Min-sik.

The new film on the block, “Midway,” finished the weekend in third place and sold 306,000 admissions through 842 screenings. Created by star director Roland Emmerich - the director behind popular disaster films such as “The Day After Tomorrow” (2004) and “Independence Day” (1996) - his latest is an American war film about the happenings of the attack on Pearl Harbor and the Battle of Midway in World War II. Instead of focusing on one central character, the film describes the historical events in order from the perspectives of various officers and soldiers.

“Frozen 2” still managed to hold on to the top-five box-office ranking despite being in local theaters for nearly two months. The Disney film gathered 113,000 people to 644 screens.

Meanwhile, director Tom Hooper’s “Cats” flopped in the local box office, ranking 12th on its second week. The film was seen by only 9,659 people at 254 screenings.

The local box office over this weekend remained relatively sluggish due to lack of new films out in theaters, but cinemas are expecting an uptick in moviegoers this week with the premieres of “Dolittle” and “Star Wars: The Rise of Skywalker.”

The former stars Robert Downey Jr. as the famous Doctor Dolittle, who has the ability to talk to animals. In the movie, he goes on an adventure to a mysterious island to save the animals. The latter, widely anticipated by fans of the series, is the third installment of the most recent Star Wars trilogy that started in 2015 and is the final episode of the “Skywalker saga.”