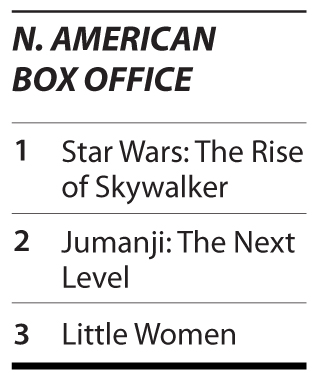 The box office in 2020 started off where last year left off: with “Star Wars: The Rise of Skywalker” still on top.

After a historic year, the Walt Disney Company opened the new year approaching one milestone and surpassing another. With $33.7 million over its third weekend in U.S. and Canada theaters according to studio estimates Sunday, “Rise of Skywalker’’ ($918.8 million) is closing in on $1 billion worldwide. While it appears unlikely to match the hauls of the trilogy’s previous entries, “Rise of Skywalker’’ will mark a record seventh $1-billion 2019 release for Disney.

One of those other six blockbusters, “Frozen 2,’’ on Sunday reached $1.33 billion, making it the highest-grossing film ever directed by a woman in worldwide ticket sales. Jennifer Lee, who co-directed both “Frozen’’ films with Chris Buck and who now runs Walt Disney Animation Studios, surpassed her own record from the first “Frozen’’ ($1.28 billion). “Frozen 2” also charts as the highest-grossing animated film, so long as you don’t count last year’s “Lion King” ($1.66 billion). Disney considers that remake live-action even though it was largely computer generated.

“Jumanji: The Next Level’’ added $26.5 million in its fourth week, bringing its domestic total to $236 million and its global gross past $600 million.

Greta Gerwig’s “Little Women,’’ meanwhile, is becoming an outright hit. The Louisa May Alcott adaptation has been the top adult-oriented choice through the busy holiday season. With $13.6 million in its second weekend and strong business overseas, “Little Women” has grossed $80 million worldwide in two weeks. It was made for a modest $40 million.

The week’s only new release also came from Sony. “The Grudge,’’ a horror reboot of the 2004 remake produced by Sam Raimi, opened with $11.3 million. That was a fair total for a movie that cost $10 million to make and received some withering reaction from critics and audiences. “The Grudge’’ scored just 18 percent on Rotten Tomatoes and engendered a rarely seen F CinemaScore from moviegoers.

Ahead of Sunday evening’s Golden Globes, a handful of contenders added momentum.

Rian Johnson’s “Knives Out’’ held better than any other film in the top 10, dropping just 9 percent and grossing $9 million in its sixth weekend. Its global tally stands at $247.5 million.

Sam Mendes’ war film “1917’’ is poised for its national expansion next week after a second weekend of packed theaters in limited release. It took in $590,000 at 11 theaters, good for an impressive per-theater average of $53,100.

And though it was overlooked by the Globes, the Safdie brothers’ “Uncut Gems,’’ starring Adam Sandler, is becoming one of A24’s biggest box-office successes. It grossed $7.8 million in its fourth and widest weekend of release, bringing its domestic overall total to $36.8 million.

After a box office year that was down 4 percent from 2018, Hollywood began 2020 on the upswing. Ticket sales were up 7.2 percent from the same weekend last year, according to data firm Comscore.