Blue House carries out a reshuffle of staff

Blue House carries out a reshuffle of staff 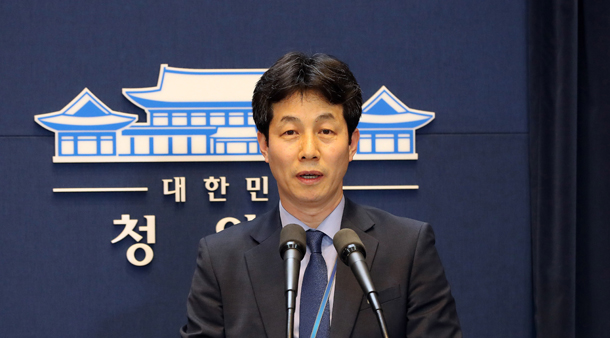 President Moon Jae-in on Monday reshuffled the presidential office to let go of a key aide who wants to run in the April general election while realigning several posts.

Youn Kun-young, director for State Affairs Planning and Monitoring Office at the Office of the President, has tendered his resignation, a Blue House official said Monday.

Speculation was high that Youn, one of Moon’s closet aides, will run in Seoul’s Guro B District in the April 15 election. That district has been represented by the ruling Democratic Party since 2000. It is currently the constituency of SMEs and Startup Minister Park Young-sun, who won three consecutive terms from there. Recently she announced she wouldn’t run again.

“We restructured the organization and functions of the Blue House to more effectively assist state affairs and push forward key agenda items during the second half of the presidency,” Ko Min-jung, presidential spokeswoman, said.

“While we maintain the current framework of three chiefs for the office of the president, office of policy and office of national security plus their 12 senior secretaries and 49 secretaries, some secretaries’ jobs were rearranged and posts for a new secretary and policy officers were created.”

Lee Jin-seok, the current presidential secretary for policy coordination, was named as its new director.

“The Moon administration has pushed forward the New Southern and New Northern policies in order to diversify its diplomatic partners and expand the country’s influence and economic accomplishments in the international arena,” Ko said. “To this end, the new post was created to support the policies and presidential diplomacy.”

Under the supervision of the presidential advisor for science and technology, Moon created a new post of digital innovation secretary. No appointment was announced Monday.

“The new secretary will take initiatives to oversee policies linked to the fourth industrial revolution,” Ko said. “He or she will be in charge of leading innovations to transform the current electronic government to a new digital government.”

According to Ko, Moon also decided to create three new policy officer posts. A policy officer in charge of public safety will serve the secretary for local autonomy and balanced development.

Appointments of the three new policy officers will be made in the future, Ko said.