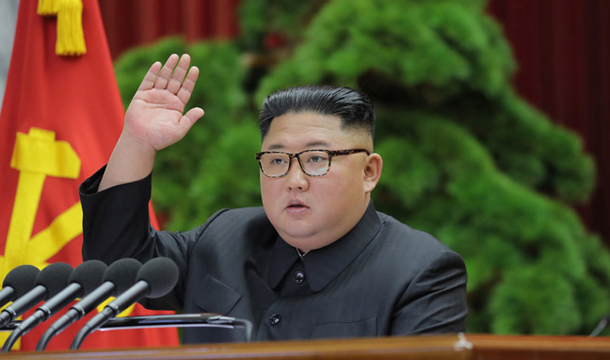 Pyongyang has been monitoring rising military tensions between the United States and Iran in a low-key manner, with North Korean state media reporting for the first time Monday the U.S. airstrike in Bagdad that killed a top Iranian general.

Instead of issuing an official response, North Korea’s state-run Korean Central News Agency (KCNA) reported that China and Russia criticized the “missile attack” Friday in Bagdad that killed Iranian Maj. Gen. Qassim Suleimani, leader of the Quds Force of the Islamic Revolutionary Guards Corps, as a violation of the United Nations Charter.

North Korean leader Kim Jong-un has been lying low since New Year’s Day, following a four-day ruling Workers’ Party meeting in late December in which he signaled a halt to his moratorium on nuclear and intercontinental ballistic missile testing and threatened to test a “new strategic weapon.” But his remarks at the meeting left open the possibility to resume talks with Washington amid a deadlock in denuclearization negotiations since the collapse of the second North-U.S. summit in Hanoi, Vietnam, last February.

North Korean propaganda outlet Meari on Sunday carried an article saying that the “Middle East will become a graveyard” for the United States, citing global military experts’ analysis of a possible war in the Middle East.

The death of Suleimani, considered the mastermind of Iranian intelligence and military forces for two decades, in the U.S. missile attack on the airport in Bagdad on Friday - which came at the direction of U.S. President Donald Trump - is seen as the most extreme response Washington could have taken to a Dec. 27 rocket attack on an Iraqi military base in Kirkuk that killed a U.S. civilian contractor and several troops, seen by the United States as being backed by Iran. It could also serve as a reminder to Pyongyang of the extreme possibilities of U.S. military action.

Trump threatened that Washington has “targeted 52 Iranian sites” in a series of tweets Saturday, should Iran make any retaliatory attack. On Sunday, Iran announced that it will no longer abide by limitations set in the 2015 nuclear deal including those set on enrichment of uranium, signaling a de facto end to the Joint Comprehensive Plan of Action (JCPOA), which was signed between Iran and the permanent five members of the United Nations Security Council - the United States, United Kingdom, France, China and Russia - plus Germany.

In May 2018, Trump unilaterally withdrew from the landmark nuclear deal led by the Barack Obama administration and imposed sanctions on Iran again - leading to escalated tensions that culminated in the airstrike last week.

Seoul has been monitoring the possible impact of the Iran crisis on denuclearization negotiations between North Korea and the United States, which could be even less of a priority for Washington.

However, some analysts have pointed to differences in the situations with Iran and North Korea. Trump has continued to boast of good relations with Kim and has said that he expects the North Korean leader to keep his promises about denuclearization.

Trump told reporters on Air Force One Sunday, “I don’t think he’d break his word to me, but maybe he will.”