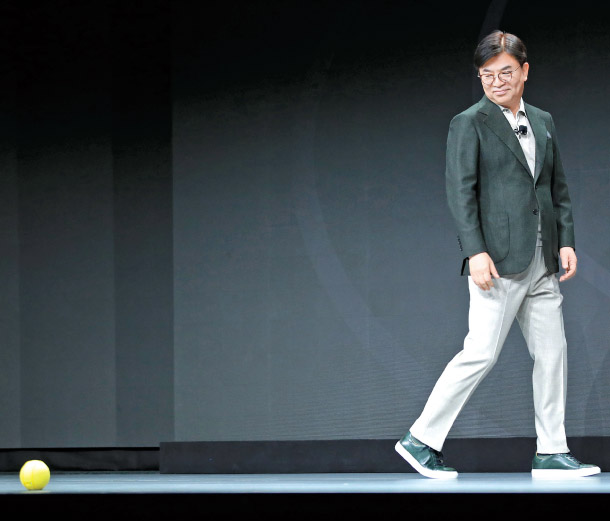 Kim Hyun-suk, president and CEO of the consumer electronics division at Samsung Electronics, demonstrates the Ballie robot during a speech at CES 2020 on Monday. [YONHAP]

Samsung Electronics took the wraps off of its new Ballie robot on Monday at CES 2020 in Las Vegas.

Billed as a “life companion,” the main function of Ballie is to communicate with internet-connected devices to activate them in the house when needed instead of handling a certain chore.

A video played during a speech by Kim Hyun-suk, president and CEO of Samsung’s consumer electronics division, featured the tennis-ball-shaped Ballie opening windows and turning off a vacuum cleaner when it recognized a spill.

The robot stopped short of displaying its range of featured functions on the debut stage apart from following Kim, apparently guided by an internal camera.

Samsung Electronics declined to comment further on how much the device might cost or when it will be available.

Ballie - which adjusts smart functions to an individual’s needs - was the perfect prop for Kim’s speech.

“In the ‘Age of Experience,’ we need to rethink the space we have to accommodate our diverse and evolving lifestyles,” he said.

Sebastian Seung, executive vice president and chief research scientist at Samsung Electronics, joined Kim on stage and alluded to more capabilities, saying that Ballie could become “a fitness assistant and a mobile interface that seeks solutions for people’s changing needs.”

“We believe AI [artificial intelligence] is the future of personalized care,” Seung said.

“We see on-device AI as central to truly personalized experiences. On-device AI puts you in control of your information and protects your privacy, while still delivering the power of personalization.”

Besides the introduction of the robot, Samsung also demonstrated an exoskeleton called GEMS, which pairs with virtual reality (VR) glasses to correct posture and assist with daily workouts. With the glasses, a user can see a VR workout instructor, who gives real-time feedback on posture.

At CES 2020, due to run through Friday, the new CEO of LG Display outlined the company’s business strategy.

The primary focus of the business will be a large-size organic light-emitting diode (OLED) display for TV.

“We will keep on expanding our range of large OLED displays, while making efforts to stabilize the production capability at the factories,” Jeong Ho-young told reporters on Monday before the trade show officially kicked off.

LG Display will also beef up different types of OLED screens, such as plastic OLED.

The plastic OLEDs or P-OLEDs, refer to OLED displays with plastic substrates, which are more flexible compared to glass-based OLEDs.

Since the P-OLEDs can be used for smaller objects, like smartphones, the display maker sees a potential.

“LG Display sees P-OLED has the highest growth potential,” the company said in a statement.

“With electric and autonomous vehicles under development, the importance of interior design comes into the limelight,” it said,

“Since P-OLED has more flexibility in design and comes with advantages in weight, response time and resolution, it has high potential for growth.”

Kia to release high-performance version of electric EV6 on Oct. 4