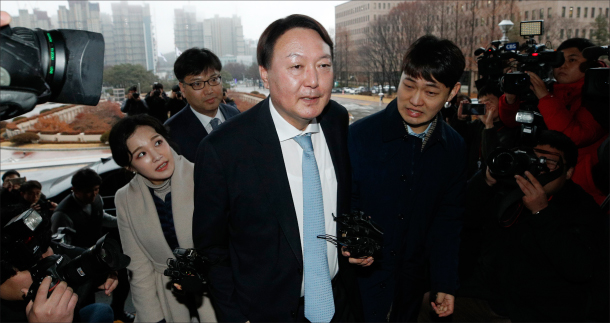 Prosecutor General Yoon Seok-youl, center, walks into the Justice Ministry building at the Gwacheon Central Government Complex on Tuesday to hold a closed-door meeting with Justice Minister Choo Mi-ae over a reshuffle of senior prosecutors. [NEWS1]

Justice Minister Choo Mi-ae and Prosecutor General Yoon Seok-youl held their first face-to-face meeting Tuesday at the ministry building in Gwacheon, Gyeonggi, amid media reports that Choo is about to carry out a major reshuffle of senior prosecutors.

Choo arrived at the Justice Ministry building at 2:57 p.m. Tuesday following a cabinet meeting at the Blue House in central Seoul. Yoon arrived at 3:53 p.m., just minutes before the two were scheduled to meet at 4 p.m.

Both were showered with questions from reporters about the rumored reshuffle as they entered the building. Neither gave any answer.

An official at the Justice Ministry only explained that Choo would probably hear Yoon’s opinions about her personnel decisions “according to the conventional process.”

The official said Choo was planned to meet Yoon one-on-one at 4 p.m., and then Yoon and heads of organizations affiliated with the Justice Ministry would pay a New Year’s courtesy call on Choo.

Choo, a five-term lawmaker who represents Gwangjin District B for the Democratic Party (DP), was appointed last Thursday, filling a position that had been vacant for more than two months since predecessor Cho Kuk stepped down amid a probe by the prosecution into his family’s alleged academic fraud and financial wrongdoings.

Sources in the Justice Ministry and the prosecution have been telling local media since last Thursday that several high-level prosecutors, including heads of high prosecutors’ offices, are expected to be replaced this week, sparking a heated guessing game as to whom Choo would reshuffle.

One big question was how much attention Choo would pay to Yoon’s opinion Tuesday when they meet for the first time.

Under the Public Prosecutors’ Office Act, the justice minister is required to hear the prosecutor general’s opinion about personnel decisions, and to this day, it was customary for the two to discuss the matter with the Blue House.

But during her confirmation hearing on Dec. 30, Choo made clear that the law dictates the justice minister should “hear” the prosecutor general’s opinion, “not discuss the issue together,” fueling speculation she wouldn’t pay much heed to Yoon’s opinions Tuesday.

Several sources in the DP and legal circles surmise that Choo would replace all senior positions related to ongoing probes targeting the Blue House and government.