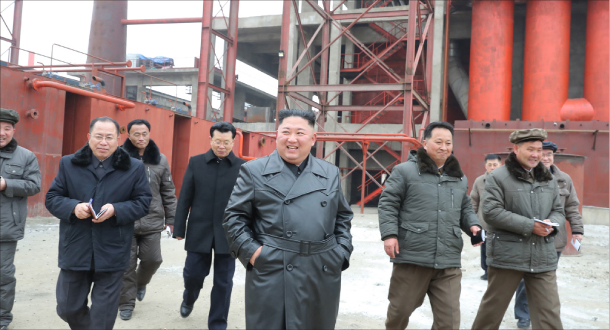 The North’s official Korean Central News Agency (KCNA) reported Tuesday that Kim visited a fertilizer factory under construction in Sunchon, South Pyongan Province, in his first “field guidance” of 2020, part of his emphasis on national “self-reliance.”

Kim was accompanied by senior officials in his visit to the Sunchon Phosphatic Fertilizer Factory and was briefed on the construction of the factory, which he said was important for “mass-producing high concentration ammonium phosphate fertilizer by our own efforts.”

The KCNA’s English-language report said that Kim expressed “great satisfaction” on seeing the efforts toward “breaking new ground in the development of the chemical industry of the country” and said that officials and builders “should continue to make excellent results by dint of such a struggle based on self-reliance.”

News of Kim’s visit came five days after state media reported last Thursday that Kim paid his respects at the Kumsusan Palace of the Sun where his grandfather, founder Kim Il Sung, and his father Kim Jong-il are enshrined. Kim skipped his annual New Year’s speech.

Analysts have speculated that Kim may refrain from public activity after Iran’s Maj. Gen. Qassim Suleimani, the powerful leader of the Quds Force of the Islamic Revolutionary Guards Corps, was killed last Friday in an MQ-9 Reaper drone attack on a convoy leaving the airport in Baghdad. This airstrike was ordered by U.S. President Donald Trump following a rocket attack on an Iraqi military base in Kirkuk killing an American civilian contractor on Dec. 27.

Former North Korean leader Kim Jong-il refrained from public appearances following the U.S. invasion of Afghanistan in 2001, when he stayed out of the spotlight for 25 days, and the invasion of Iraq in 2003, when he laid low for 50 days.

Kim Jong-un doesn’t seem to have such fears after Suleimani’s killing.

“Chairman Kim has stressed the personal friendly relations he has built up with President Donald Trump,” a Seoul official said Tuesday. “Either he recognizes that he is different from Suleimani or he has an intention to show off the construction work.”

In a report made to a Workers’ Party Central Committee meeting last month, Kim stressed a “frontal breakthrough” through self-reliance and told his country’s leaders “not to wait for the situation to turn better.”

The South Korean government official said that Kim is “showing domestically that he has the will to achieve this himself.”