Moon keeps the faith in engagement of Kim

Moon keeps the faith in engagement of Kim 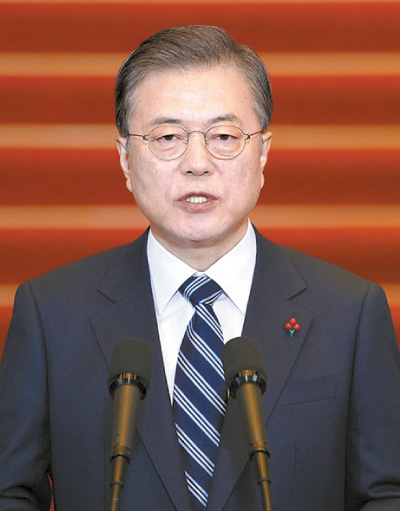 Expressing frustration at the lack of progress in the North-U.S. talks in his annual New Year’s address, Moon said Tuesday he is worried about a regression in inter-Korean relations.

“There is a desperate need to find realistic ways to improve inter-Korean cooperation, while working for the success of the North-U.S. dialogue at the same time,” he said in the message, which was delivered before a cabinet meeting at the Blue House.

Moon made a series of proposals to North Korea, including a renewed invitation to its leader Kim Jong-un to visit South Korea. Conspicuously missing in this year’s message was any mention of denuclearization of the North.

The two Koreas must work together to create conditions for Kim’s reciprocal trip to the South as soon as possible, Moon said, noting that this year marks the 20th anniversary of the first inter-Korean summit.

During their third summit in Pyongyang in September 2018, Moon and Kim Jong-un agreed that Kim will make a reciprocal visit to Seoul before the end of that year. The promise was never realized.

Stressing that he is willing to repeatedly meet and talk to his North Korean counterpart, Moon said he will put efforts into reopening the Kaesong Industrial Complex project and restarting tours to Mount Kumgang, suspended by his conservative predecessors. Resuming those projects is a sensitive issue due to international sanctions imposed on the North for its nuclear and missile developments.

The inter-Korean industrial zone in Kaesong was shut down in 2016 by former President Park Geun-hye after a long-range missile test by Pyongyang. The Lee Myung-bak administration ended the tours to the mountain after a North Korean soldier shot and killed a South Korean tourist in 2008.

A series of sports exchanges were also proposed. He recollected that Kim had promised him at the Pyongyang summit in 2018 that the two Koreas will make a join bid to host the 2032 Olympic Games. Moon urged the North to follow on that promise by continuing sports exchanges.

Moon said North Korea should send athletes to the East Asian Weightlifting Championships and World Team Table Tennis Championships that the South will host this year. He said Seoul and Pyongyang must continue discussions to march together in the Tokyo Olympics’ opening ceremony and create a joint team.

Moon also urged the North to start cooperative projects at the inter-Korean border. He reiterated his proposal of last year to develop the demilitarized zone as an international peace zone.

Moon also urged the North to respond to the South’s proposal to register the demilitarized zone as a Unesco World Heritage site for its ecosystem and historical value.

Moon reiterated his hope to connect severed railways and roads between the two Koreas. “If the two Koreas find together a reasonable way to link the railway and road projects, it will invite international cooperation,” Moon said. “It will also greatly help resumption of inter-Korean tours and boost the North Korean tourism industry.

“What we want to eventually accomplish through peace is a peace economy,” Moon said. “It is to open an era where national division is no longer an obstacle to peace and prosperity, so that both Koreas will prosper with their neighbors.”

The proposals to North Korea in the New Year’s message were a development of Moon’s brief remarks last week that “peace will not come without actions.”

At a New Year’s event at the Korea Chamber of Commerce and Industry on Thursday, Moon said, “I will create a larger room to maneuver in inter-Korean relations.”

In Tuesday’s speech, Moon barely touched on South-U.S. relations, devoting just a brief, lackluster sentence to the topic. “I will elevate the traditional alliance with the United States to a higher level,” Moon said, “and work together to complete the Korean Peninsula process.”

In contrast, Moon said exchanges and cooperation with China will be strengthened in various areas.

Since Chinese President Xi Jinping and Premier Li Keqiang are scheduled to visit the country this year, Moon promised to elevate South Korea-China relations to the next level.

He also vowed to work with Japan and improve bilateral ties.