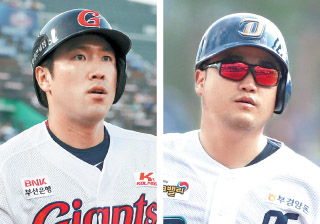 Jeon Jun-woo, left, signed a four-year contract with the Lotte Giants, while Park Sok-min signed a two-year contract, with an option of another year, with the NC Dinos on Wednesday. [YONHAP]

Just a few days after the Lotte Giants announced the signing of infielder An Chi-hong, the team signed star player Jeon Jun-woo.

“I’m thankful to the Lotte fans for waiting and supporting me until the contract was finalized,” Jeon said in a statement released by the Giants. “I’ve heard a lot of people asking me to stay at Lotte throughout this time. The support of the fans really touched me and through that I was able to set my mind to continue playing baseball for Lotte. I’ll work hard to meet the expectations with good results.”

At age 33, Jeon earned his eligibility for the first time after the 2019 season. Jeon made his KBO debut with the Giants in 2008 after graduating from Konkuk University. After limited playing time, Jeon started playing full time in his third season, in 2010. Jeon’s career started to stand out after he returned from the Police Baseball Team, where he fulfilled his military duty.

“Jeon Jun-woo is a must-have player on our club and one of the league’s best star players,” said the Giants in a statement released. “We never thought of losing him. More than anything, as he’s been a great role model to other players. We thought that he can be a good influence to the players on and off the field.”

By signing both Jeon and An this week, the Giants are expected to have more options in their defensive strategies in the upcoming season by using Jeon, who played outfielder, as a first baseman.

The Dinos said Park agreed to a two-year contract, with an option of another year. If Park manages to play all three seasons, then he can earn up to 3.4 billion won. In his first two seasons, Park’s contract is worth 1.6 billion won, but in his third season, he could earn up to 1.8 billion won.

“I feel the responsibility that as a veteran, I need to prove my worth through my performance,” Park said in a statement released by the Dinos. “I started new training to improve my speed. I’ll meet up to the expectations the team has of me by fulfilling my role as the center of the [batting] lineup.”

After making his KBO debut with the Samsung Lions in 2004, Park earned his first eligibility as a free agent in 2015. At the time, he signed a big contract with the Dinos, a four-year deal worth 9.6 billion won.

During his first season with the Dinos, Park met expectations by finishing with a 0.307 batting average with 32 home runs and 104 RBIs. However, due to minor injuries Park struggled to play full time and saw a big drop in his statistics.

Although he didn’t have the best season in 2019, he achieved a slight comeback by finishing the season with a 0.267 batting average with 19 home runs and 74 RBIs throughout 112 games.

“If Park Sok-min is healthy, then he can definitely contribute [to the team] on the offense,” said the Dinos general manager Kim Jong-moon in a statement released by the club. “We came to an agreement after considering a player’s contribution and the team’s future.”

In addition to the signing of two free agents, the Doosan Bears announced the re-signing of their foreign player, Jose Fernandez. The Bears said Fernandez agreed to a one-year contract at $900,000 - $450,000 in guaranteed salary and another $450,000 in incentives.