Through dance, a new start: Movement classes have shown to alleviate many signs of Parkinson’s disease

Through dance, a new start: Movement classes have shown to alleviate many signs of Parkinson’s disease 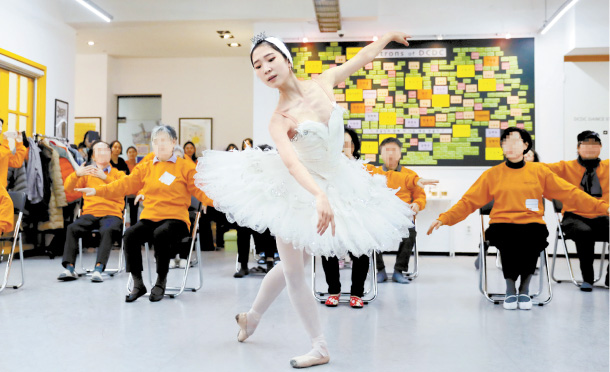 Upbeat disco music resonates through a spacious studio. With the music on, people who used to take short and fast steps with their bodies slightly bent begin to raise their feet and walk with bigger strides. They straighten themselves out and their steps become more relaxed as they indulge themselves into the music.

After a while, it is hard to point out who in the studio has a diagnosis and who doesn’t. Some of the patients who were nervous in the beginning start to keep pace with the music and their moves become as beautiful as butterflies.

A blonde-haired instructor named Pamela Quinn is leading the pack.

“You have become a totally different person from now on. Imagine that you’ve become a model walking the runway,” Quinn said. 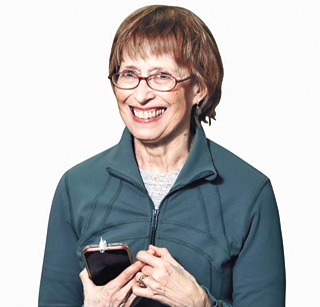 People with Parkinson’s disease, top, perform with ballerina Lee Yoon-ji at Studio Maru, located in Hyehwa-dong in Jongno District, central Seoul, in December. The students spent a month preparing for the performance. (Their faces have been blurred at their request.)

It was an ordinary Monday afternoon in December, but the class being held inside Studio Maru located in Hyehwa-dong in Jongno District, central Seoul, was extraordinary. The people who attended the class saw how dance can heal their bodies and souls.

It was a workshop held for patients with Parkinson’s disease organized by Dancers’ Career Development Center (DCDC). The workshop was given by Quinn from the United States, who has Parkinson’s herself. The 65-year-old former professional dancer shared some tips on how to overcome stiff muscles through dance with about 40 patients and their families that day.

Parkinson’s disease is a nervous system disorder and often accompanies symptoms like stiff muscles, reduced facial expressions, impaired balance and slurred speech. Since it is a long-term degenerative disease, a lot of patients often experience depression as their conditions deteriorate.

But special experiments are underway for patients, and “Dance for Parkinson’s Disease” is one of the programs. In Seoul, DCDC is in charge of the program.

The organization was launched in 2017 to help professional dancers to find jobs after their retirement.

At DCDC, former professional dancers teach choreography to patients suffering from Parkinson’s disease so that they can relax their rigid muscles through dance.

Unlike the dance programs offered to the patients at DCDC, Quinn’s class offered a different approach to movement. Her program, PD Movement Lab, puts an emphasis on daily, approachable movements. PD is an abbreviation of Parkinson’s disease.

Quinn worked as a professional dancer for 20 years, and she was diagnosed with Parkinson’s disease when she was 42. She’s been wrestling with the disease for two decades.

Based on personal experience, Quinn’s programs are credited for enhancing mobility of patients with her own innovative approaches.

Now she is actively involved in various campaigns for patients with Parkinson’s disease.

According to Quinn, dance can be part of your life as long as you are ready for a challenge.

Quinn learned herself the importance of challenging yourself to move in different ways. She once attended an open class given by her son’s football team and was able to kick a ball with her weak left leg. After doing so, she realized that her leg was okay. By tricking her muscles, she could overcome limping the moment she kicked the ball, even though it lasted for just a few seconds.

“Let’s say you kick a ball. Then you have to move your lower part of your leg, underneath the knee. I knew my left leg was not okay, but it worked normally when I kicked the ball,” said Quinn.

It was an “aha” moment for her.

“I realized what I needed was specific situations that challenged me. Since then, I imagine myself kicking a ball when I am walking.”

The class’s opening song “Arirang” led into a waltz. The waltz took the patients to an elegant ball in Medieval Europe.

A few lines were drawn on the floor in the shape of stepping stones, and as Quinn held hands with each patient, she helped them cross the room while being sure to step on each spot. After finishing the path, each person beamed with joy.

Chae Bong-seok was one of them. When he crossed the stepping stones with big strides, the studio filled with cheers not only from his family, but from instructors who have been teaching him for years at Dance for Parkinson’s Disease.

Quinn’s different style provided some insights to the instructors working at DCDC.

“There is a patient who used to walk with quick steps but he experienced [success with Quinn’s program] and challenged himself one more time. I was really surprised to see that,” said Kim Mi-young, one of the instructors.

“We tend to put a priority on artistic achievements [of patients] and guide them to move carefully, but Quinn is much bolder because she is well aware of how far patients can go. I can take her style into consideration when I’m teaching patients later,” Kim added.

On Dec. 18, two days after Quinn’s one-day workshop, a special performance was held at the same venue.

A ballerina clad in a tutu glided into the center of the studio, and the entire studio erupted in a loud applause.

As Tchaikovsky’s “Swan Lake” played in the background, Lee Yoon-ji, a dance major at Sejong University, performed the solo dances of Odette, the swan princess.

To accompany Lee, the students in the class performed a group dance from the ballet while seated on chairs.

“Swan Lake” was then changed into twist dance music, and the students stood up from their chairs and danced. While wearing Santa Claus hats, they pulled off the 25-minute performance successfully. Although the performance only lasted for 25 minutes, it lingered in the minds of the audience even after the performance was over.

The patients prepared for the show for a month under the guidance of choreographer Kim Mu-hyun.

After the performance came to an end, everyone in the class looked overwhelmed.

“It was a little hard, but I had so much fun while doing it,” said Choi Jin-gyeong. “I appreciate the teacher who created the wonderful dance for us. We’re afraid of going out, but I am able to meet other patients and teachers who understand us whenever I come here. Whenever I have a dance lesson, it feels like visiting my mother’s house,” she added.

Park In-ja, the chairman of DCDC, said, “We organized this event in the hopes that the patients forget they are struggling with Parkinson’s, even if it is just for a while.”

The families of the students were happy to see their loved ones taking part in the performance.

“I see my wife dancing even in her dreams. Ever since she found this program two years ago, we regularly come,” said Kim Young-cheol.

“Parkinson’s disease is an incurable disease, but she is getting over it by communicating with other patients on social media. I want other people who are fighting the disease alone to join the community as well.”

Dance for Parkinson’s Disease is currently available in 250 communities across 24 countries.

In Korea, DCDC runs one class in Seoul, while other locations including Lion Hospital in Incheon, the Pusan National University Yangsan Hospital in Busan and the Parkinson’s Healing Center in Gwangju, offered the same program as a trial.

Some scientific research supports the effects of dance therapy. The University of Freiburg in Germany conducted an eight-month long study of 11 patients with Parkinson’s disease in 2011 and found that most of the patients saw their tremors and rigid muscles decrease while taking dance lessons.

Koh Seong-beom, a professor of neurology at Korea University Guro Hospital, said, “We haven’t started analyzing how patients’ exercise capacity has enhanced yet, but we saw significant signs of progress in depression and speech.”

Koh has been monitoring patients who sign up for the Dance for Parkinson’s Disease class for six months.

“I saw notable changes, especially in speech. People who hardly talked now begin conversations. People who previously spoke quietly and with a limited number of words now sound more articulate and use more words than before.

“If the program was available at dementia centers nationwide, it could reach more people,” Koh added.