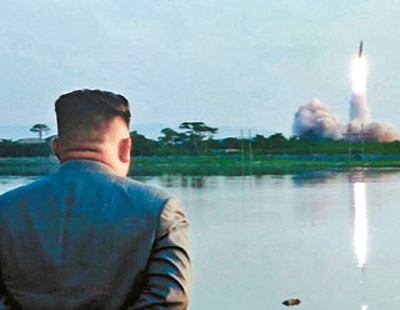 CHUN SU-JIN
The author is an acting deputy head of the international and security team of the JoongAng Ilbo.

I don’t feel very happy today. What’s so special about a birthday? I am not so comfortable drinking my favorite Bordeaux wine because of the sanctions by the imperialists. Next month will mark one year since my humiliating return from Hanoi, Vietnam, empty-handed after a 65-hour-long train ride. It was a gamble for me to meet with U.S. President Donald Trump three times. As Trump said, North Korea could become a powerful and prosperous country under my leadership. Why can’t I become the hero of the Miracle of the Daedong River? If Park Chung Hee could do it in the South, I can do it better. That’s why I picked a construction site for the first official outing of the year, so that I can show off my love for economy.

The problem is the sanctions. I can do something when the sanctions are lifted. The United States and South Korea are just saying things. As the people have high expectations, it is my burden. With impeachment and the election in the United States, I shouldn’t be hopeful. So my conclusion for 2020 is this. Give up useless hopes. The only thing I can trust is nuclear weapons. Take the bull by the horns. Only then, the United States and Korea will pay more attention to us.

Other countries would wonder why I did not issue a New Year’s address and instead held a four-day Workers’ Party full-session meeting. As this year marks the 75th anniversary of the founding of the party, I need to give power to the party for my authority. My sister Yo-jong has just been appointed the first deputy director of the party. I included everything I wanted to say in the statement of the full-session meeting. In the long statement, a “frontal breakthrough” was mentioned 23 times. I mean it when I said, “Let’s move onto a real, shocking action.” I still don’t know what the shocking action means. But you would see that the door to talks remains open if you read between the lines. I need to have a showdown with the United States quickly.

But after the statement, the chief commander of Iran has been assassinated in a precision drone strike. Trump reportedly made an operation order while eating ice cream. I wouldn’t deny that I felt frightened to see the scene of the blaze. When I threatened to send a Christmas present, Trump said he hoped it would be a beautiful vase. Only Trump can make such a comment. But a vase? Why was the Iranian general killed? It happened after our agreement to give up nukes in 2017.

Time is on my side. Trump will be in office for five more years if he is reelected. I am still in my 30s. For that period of time, I cannot give up nuclear weapons.