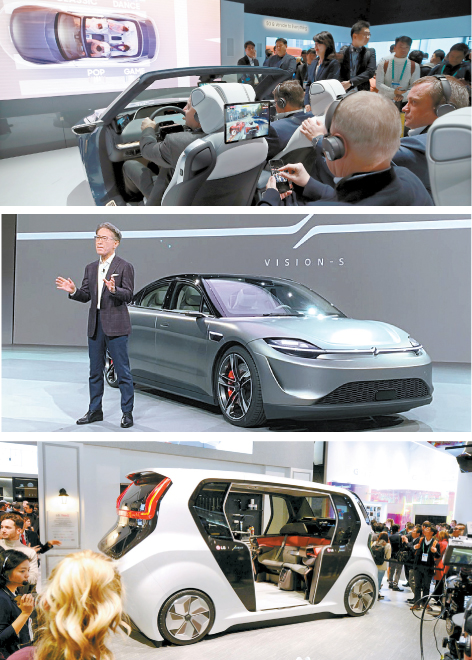 From top: Visitors try out the Samsung Electronics digital cockpit on Tuesday at CES 2020 in Las Vegas. Sony CEO Kenichiro Yoshida introduces the company’s first-ever concept car Vision-S that is electric and can be self-driven on Monday. LG Electronics’ connected-car model is on display at the company’s booth on Tuesday. [YONHAP, SONY, LG ELECTRONICS]

While autonomous driving remains but a dream, everyone seems to want in on the game, with another major corporation expressing an interest in the market. It is also becoming apparent that the field is attracting more than just the automakers. The latest autonomous car player is an electronics company.

Sony shocked CES 2020 in Las Vegas Monday when it introduced a concept electric autonomous driving car. The electronics company, which is known for its audio and visual products, has never produced a car. It makes auto components, but its Vision-S, a sedan, is a first.

“It’s not an exaggeration that mobile has been the mega-trend of the last decade,” said Sony CEO Kenichiro Yoshida while introducing the Vision-S. “I believe the next mega-trend will be mobility. Sony will continue to evolve as a creative entertainment company with a solid foundation of technology.”

Equipped with a total of 33 sensors, the Vision-S can detect and respond to its surrounding environment to allow for autonomous driving. The prototype looks similar to Porsche’s first fully electric sports model, the Taycan. It comes with wide-screen displays at all seats and a “360 Reality Audio” system.

According to Sony, the Vision-S can exert speeds up to 240 kilometers (149 miles) per hour with a pair of 268-horsepower electric motors. The model can hit 100 kilometers per hour in 4.8 seconds.

Sony said the prototype model makes official the conglomerate’s entrance into the future mobility race based on its advanced light detection and ranging (lidar) system and camera technologies. Sony’s lidar system is well regarded, as it is more affordable and smaller than those manufactured by other companies.

The arrival of Sony is a bit of a watershed. It seems to signal that the autonomous driving race isn’t just for car companies.

As many consider future cars as a collection of advanced technologies, local players participating in CES 2020 also showcased their efforts to increase their footprint in the future mobility market. They may not be as big as Hyundai Motor, but they are trying to fit in and get ahead of the market by designing cockpits and additional services to be embedded in next-level vehicles.

At this year’s CES, SK Telecom signed a partnership agreement Tuesday with Chinese electric vehicle maker Byton to develop an integrated in-vehicle infotainment (IVI) system. As the company expects autonomous vehicles to be available in the near future, it said the agreement was made to target the demand for in-vehicle entertainment services, which is expected to grow as people will no longer have to drive while in their cars.

SK Telecom said the company is already capable of supplying high-level IVI systems because of its mobile navigation, audio streaming and video services. The company plans to use 5G technologies in the system so that content can be accessed and displayed faster inside vehicles.

The Korean telecom company has been working to expand its presence in the mobility sector. It signed an agreement last year with Harman and Sinclair Broadcast Group to develop a broadcasting-network-based automotive platform and also reached an agreement with BMW to co-develop car navigation solutions.

Samsung Electronics, which has traditionally focused on making smartphones and semiconductors, is also trying to get involved. The company announced its 5G-ready telematics control unit (TCU), the world’s first 5G-based unit. It was co-developed by its Harman subsidiary and will be installed in the iNEXT electric vehicle for BMW, which is scheduled to be released in 2021.

TCUs are considered an essential component of connected-car services. They allow drivers to receive real-time information on their vehicles. Samsung Electronics said that its 5G-based TCU has low-latency communications and can provide advanced vehicle-to-vehicle safety communications.

The 5G-ready TCU, which can download high-definition maps in real time and allow drivers to engage in visual conference calls while driving, is being tested in some buses and taxis in Seoul, Samsung Electronics said.

At its booth, Samsung Electronics exhibited its upgraded digital cockpit for future cars, along with the digital assistant Bixby, that can deliver better infotainment and in-car services to passengers with 5G technology. The company first introduced its digital cockpit at the same expo two years ago.

Also on Tuesday, LG Electronics signed an agreement with Switzerland-based software company Luxoft to establish a joint venture in Santa Clara, California, in the first half of the year. It will develop future vehicle solutions.