For some, glass half full after alcohol tax changed

For some, glass half full after alcohol tax changed 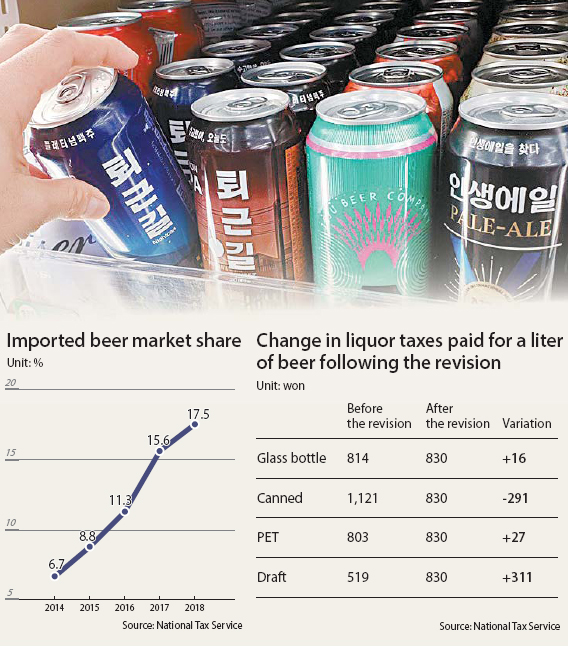 A revision in the system for taxing rice wine and beer is getting mixed reviews in the market. Convenience stores are taking advantage of the change, marketing domestic beers aggressively, but the effect may be limited at restaurants and bars, where prices could increase.

Under the revised taxation system that started this year, domestic beer and rice wine, or makgeolli, are taxed by volume and content. Before the change, they were taxed by cost of production, including costs for marketing and profit.

Microbrewers expect the revision to help them make higher-quality craft beers, as they can use better malt and hops for their products without concerns for the liquor tax.

Based on the revision, the factory price of canned beers will likely go down, while the products packaged in plastic and glass will become more expensive, as aluminum cans are relatively more expensive.

“Following the change in the taxation system, domestic craft beer manufacturers overshadowed by imported beers started releasing more diverse types and flavors of drinks,” said a spokesperson for BGF Retail. “The domestic craft beers are expected to have a higher presence in the market with more diversity and lower prices.”

A spokesperson for CU, however, admitted the price of polyethylene terephthalate, or PET, and glass bottles could inch up if their factory price increases.

“If the cost of production is further adjusted, GS25 is willing to review that change in the retail price,” said a spokesperson for GS25.

Discount marts, on the other hand, are not in a hurry.

Price changes on rice wines following the tax revision is expected to be little because its tax rate was only 5 percent under the tax system that charged based on the cost of production, unlike the 72 percent levied on beer.

Despite the government intention to lessen the consumer burden through the tax revision, industry insiders argue the revision’s effects on retail price will be limited.

“Bucking the dominant view, the reduction in the retail price of beer is projected to be limited because revising tax based on alcohol volume could lower the prices of canned beers but will increase the prices of beers packaged in other types of materials,” said a spokesperson for Hite Jinro.

“Costs may be passed onto consumers disproportionately because restaurants or bars don’t raise the price of a drink by several won, but by 500 won or 1,000 won. They could also maintain the price of the drinks whose factory prices dropped to make up for the loss incurred from the increase in labor cost.”

A spokesperson from Oriental Brewery said, “Just because the factory price has inched down doesn’t mean it will automatically result in a reduced consumer price because that is determined by the final seller, not the manufacturer.”

Oriental Brewery in October lowered the factory price of all Cass beers by an average 4.7 percent, but the effect only lasts until the end of the year. How Oriental Brewery will adjust the price next year remains undetermined.

The government is allowing a 20 percent reduction on the tax on draft beer for two years.