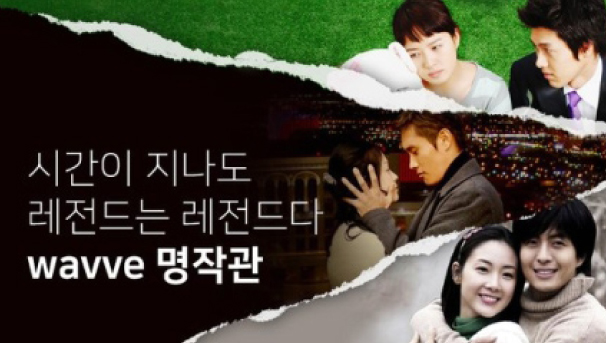 The video streaming wars are heating up, as the existing players prepare for new, highly competitive entrants. With Apple and Disney seen coming to Korea in a serious way, Netflix, Wavve and Watcha are digging in and consolidating their positions.

Since Monday, homegrown Wavve has been charging new users to its streaming service only 100 won (9 cents) for the first month. This comes just after a recent offer of 4,000 won for the first three months. Wavve is a joint video-on-demand platform of three terrestrial broadcasters, KBS, MBC and SBS.

Netflix will partner with local production houses to increase Korean-language content, while other competitors are beefing up their offerings and providing cinema-level viewing experiences at home.

The main players in the domestic market are making bold changes to defend their hard-won turf.

The biggest threats seen are Apple TV, which has been around for years, and Disney+, a division of Walt Disney Company started last year. It quickly gained subscribers and has fast become the main challenger to the domination of Netflix globally.

Disney+ has been rolled out in six markets: Australia, Canada, the Netherlands, New Zealand, Puerto Rico and the United States. It is planning on entering six more this year. Korea is reportedly not included on the list of new markets, but industry watchers are betting on the possibility that Disney+ will expand to Korea sometime this year.

They expect the Mouse House to shake things up.

Disney+ has secured the rights to a wide range of “killer content,” such as “Aladdin” and the “Frozen” and Marvel series. This programing gives the company incredible power in the market. The library has a good deal of material available for younger viewers, so one channel can serve an entire family.

Another competitive edge for Disney+ is its price. A monthly subscription is set at $6.99. That is cheaper than others. Netflix subscriptions run from 9,500 won to 14,500 won.

Disney will also forge partnerships with internet TV or cable TV providers to provide a one-stop shop for viewing.

Competing streaming services are in a race to secure more customers. To lock in as many Korean consumers as possible, Netflix will increase the number of Korean-language originals it offers. It has partnered with local production houses to accomplish this.

Netflix signed an agreement last November with CJ ENM and its Studio Dragon affiliate to produce and distribute at least 21 original programs or films over the next three years. The partnership will start this year. Netflix also partnered with JTBC to create 20 new programs over three years.

Wavve is investing in new material and aggressive marketing to attract users. It invested 10 billion won in the production of “The Tale of Nokdu,” a romantic TV series set in the Joseon era (1392-1910). According to a company official, it will invest around 50 billion won this year to create original content. Investments are starting to pay off. According to analysts, Wavve brought in around 1.4 million subscribers in less than four months. It is catching up to Netflix, which has a little over 2 million subscribers in Korea.

Watcha, a local movie streaming service, announced a premium option that provides content in 4K quality. It also offers simultaneous access for up to four people and free downloads of up to 100 programs on mobile devices to watch later. Park Tae-hoon, Watcha CEO, said the company will continue to make efforts to increase competitiveness in price, technology and content against international services.