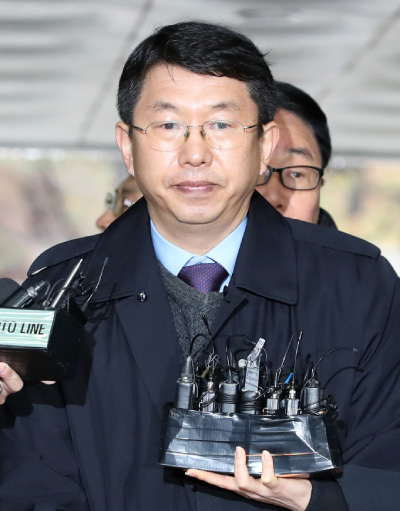 A Seoul court held a hearing Wednesday to determine whether to issue pretrial detention warrants for six people accused of botching the rescue operations in the 2014 Sewol ferry tragedy, which left 304 passengers dead or missing.

Kim, who arrived at the court yesterday morning to attend the hearing, said as he entered the building he would “humbly” follow the court’s decision. Yet he stressed that he and the Coast Guard did their best to save lives on the day of the accident.

Jang Hun, an executive member of a group that represents the dead passengers’ families, was invited to the courtroom to relay his thoughts to the presiding judge. After the hearing, Jang told reporters that he told the judge he “strongly” believes the six suspects should be detained.

“I told the judge about the pain that our families had to go through over the past six years,” Jang said. “I stressed that in order to prevent such an accident from reoccurring, people who were in charge of [the rescue operations] need to show they’re taking responsibility.”

Kim Kyung-il, who was captain of the first Coast Guard ship dispatched to help the Sewol passengers, was the only person in the Coast Guard to have been charged when prosecutors from the former Park Geun-hye administration investigated the case.

He was sentenced to three years in prison for professional negligence resulting in death and completed his sentence in 2018.

Since the ferry’s sinking, a series of investigations took place to uncover the reasons for the accident, the abysmal rescue operations, poor government response and subsequent cover-up attempts. The prosecution’s latest investigation is the seventh of its kind.

The most recent probe from prosecutors came in November at the order of Prosecutor General Yoon Seok-youl, shortly after he was named chief of the prosecution. A special unit has since been investigating a slew of allegations surrounding the Sewol ferry, including those pressed by a so-called special investigation commission mostly composed of civilian experts, surviving victims and their families.

One of the commission’s recent assertions was that a helicopter dispatched for the rescue operation on the day of the sinking was allegedly used by senior officials from the Coast Guard, depriving Sewol passengers of their chance to reach safety.