Ssireum battles its way back into people’s hearts: After a clip of a match went viral, the traditional sport is becoming a hit on KBS

Ssireum battles its way back into people’s hearts: After a clip of a match went viral, the traditional sport is becoming a hit on KBS 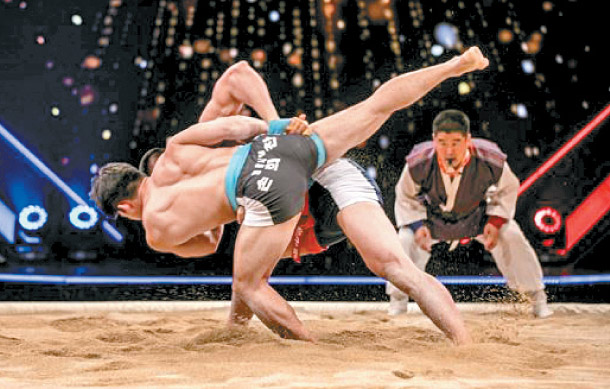 KBS2’s sports audition program “The Ecstasy of Ssireum” features Korea’s traditional wrestling sport called ssireum, where men wrestle each other on sand, above. In September, a ssireum video, below, went viral online which featured comments like “Only the grandpas were watching something this good?” [KBS, SCREEN CAPTURE]

“Only grandpas were watching something this good?”

“This was recommended to me, and honestly I came here just to see these two hot guys.”

“Yes, just two cute boys grappling each other in the sand.”

“YouTube, why did you recommend this video to me? Thank you.”

“Why is the clip so short? I’d like six hours of this.”

This is just a small sampling of the thousands of comments posted under a YouTube video of ssireum, or traditional Korean wrestling, that went viral months ago in Korea.

In the clip, two young men wrestle against each other in the sand, wearing nothing but short pants and strings around their waist and hips. What especially caught the attention of 2.3 million viewers is that the two athletes were the very definition of fit and muscular, contrary to the common perception that ssireum athletes are chubby and overly sturdy. 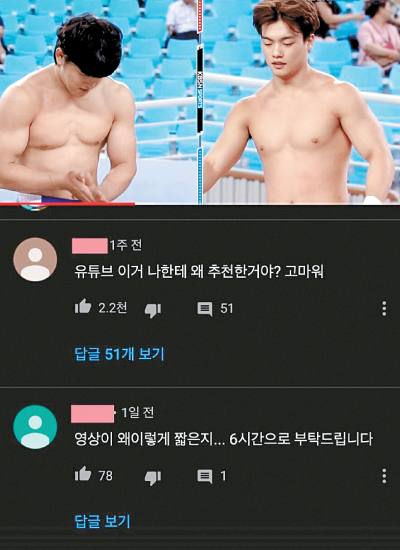 There was a time when ssireum was so popular that the champions became TV stars, like Kang Ho-dong and Lee Man-gi, during the 1980s and 1990s. Although the sport’s heavyweight athletes were its most recognized figures, many were turned off by watching the large men fight each other. Plus, ssireum has long been thought of as a sport that only older folks enjoyed watching - until now.

KBS2’s new show “The Ecstasy of Ssireum” (translated) began on Nov. 30 and features 16 lightweight athletes who compete against one another to become the show’s final champion. Featuring not only matches between the wrestlers, but interviews with each contestant as well as detailed explanations of each technique used during matches, the show will air its fifth episode this Saturday at 10:35 p.m. The show’s ratings reach only a modest 2.4 percent on average so far, but the comment section of the show’s clips on YouTube is filled with fans supporting the show.

The video that first attracted viewers to the world of ssireum was a clip from Aug. 8, 2018, of the final round of the “15th Haksan National Ssireum Competition” held in Gimcheon, North Gyeongsang. The two wrestlers - Hwang Chan-seob and Kim Won-jin - each had physiques that caught people’s eyes for being the right amount of muscular and healthy, bringing about the heated reaction to the video. The humorous comments were soon made into memes and passed onto other sites and communities.

According to KBS, production on the show began in early September - before the YouTube video went viral - at a national competition series that was held around the Chuseok holiday season, when families gather around TV together and adults often get the say with the channel selection. According to producer Park Seok-hyoung, the timing was a pure “coincidence.”

“I grew up watching ssireum matches with my family when I was younger,” he said. “But at some point, people stopped watching it. It’s still such an exciting sport if you watch the matches, but you don’t really get the chance that much. We wanted to bring back that nostalgia and introduce the fun to the younger audiences.”

The reason he chose lightweight athletes wasn’t because they were popular online, but because they were the most apt at bringing out the fun in ssireum. Contrary to the heavyweight matches, where technical skills seldom overcome the difference in weight and physique, skills are crucial in the lightweight division and thus more fun for the audience as well, according to the Korea Ssireum Association.

From the rise of stars such as Lee and Kang, people believed that heavyweights were the norm in ssireum, which some say was a factor that led to the decrease of ssireum’s overall popularity. Other factors such as the deteriorating economy in the 1990s, the feuds of ssireum teams and the growth of other sports leagues and competitions also took traditional sports out of the public eye, the association said.

“When it comes to heavyweight matches, only the strength of the individual athletes matters, and there’s not much to change,” said a spokesperson from the association.

“The show’s still airing, but we have high hopes that it will bring [back to] ssireum the popularity it once enjoyed.”

The fact that the show doesn’t just air matches, but provides other details such as interviews and explanations of each skill also adds to the appeal for viewers, according to pop culture critic Jeong Deok-hyun. Contrary to just showing ssireum matches, “Ecstasy” includes more narratives about each athlete, as well as detailed commentary on the skills the people use to make the show more viewer-friendly in general.

“The show has turned ssireum into an audition, and has birthed fans similar to those of K-pop,” Jeong said. “Unlike normal matches, the program shows athletes from various camera angles, sometimes in slow motion, to make it more understandable for the audience. And the interviews with each athlete allow viewers to relate to each person’s story. Overall, the show takes the idea of ssireum, shows it in a totally different way and turns it into something new.”

The show may not be the biggest hit, but it’s gotten the athletes excited, too. Hwang - who appeared in the viral video and is a contestant on the show - posted on his Instagram that he’s reading all the comments and that he’s grateful for every one of them. He’s expressed his joy to producer Park, saying he’s never had people around him interested in what he does since he started his career.

“The fact that a major television channel is airing the sport is meaningful, as it hasn’t gained this much attention in so many years. There’s going to be another national competition series around the Lunar New Year Holidays. We hope that it brings a new wave in the trend,” the producer said.

Yet, even if the contestants are enjoying the attention towards the show and themselves, the fact that many of people’s comments are directed towards their bodies could be a concern in the long run, according to Professor Yun Ji-yeong of the Body & Culture Institute at Konkuk University.

“In a capitalist society, the body is more than just something physical. It’s a symbol of the power relationships within society - putting the speaker above the recipient. It sets a standard for myself, putting me at competition with how I looked yesterday, how I look today and how I will look tomorrow. It leads to competition with other people and ultimately leads to restrictions for people,” she said.