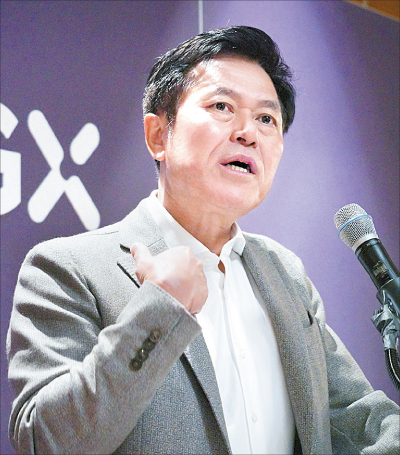 SK Telecom’s chief said Wednesday that the company is ready to partner in advanced technologies to target future growth engines and free itself from the traditional identity as a mobile carrier.

“Global companies such as Google, Amazon and Facebook have already joined to create a new AI partnership,” Park said to reporters at the CES 2020 trade show held in Las Vegas. “Once the big firms team up, there is no way a Korean firm can stand alone in the global market.”

During the tech expo, Google, Amazon and Apple announced their alliance to develop a standardized smart home by using AI and Internet of Things technology. Park said he met with Samsung Electronics President Koh Dong-jin during the event and discussed partnerships.

“The AI industry needs SK Telecom and Samsung. If the companies do not cooperate, neither can players but fall behind as losers in the global market,” Park said. “Many domestic firms have agreed on this statement.”

During CES, Park said he has already taken steps toward beneficial partnerships for new technologies.

“We have already reached a consensus with Kakao toward this goal, and we shall discuss in details on how to mix our specialties and divide the shares once we go back to Korea,” he added.

Park also emphasized collaborating with foreign counterparts for survival, adding that the company has already been making progress, as it is engaged in a partnership with Microsoft.

“Amazon Web Services CEO Andy Jassy has expressed a strong interest in SK Telecom’s 5G MEC technology,” he said. “We are making progress in working with global firms with our 5G technology.”

“Korean firms will become losers if we act independently. We must enhance global competitiveness in the global markets of new industries such as AI by joining hands with domestic and foreign companies.”

Park revealed that SK Telecom is considering removing “Telecom” from its name.