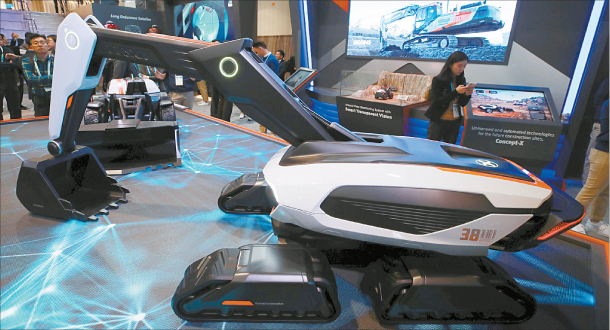 An unmanned excavator is on display at Doosan Group’s booth at the CES trade show in Las Vegas on Thursday. [YONHAP]

The comments made were during Park’s tour of Doosan’s booth at CES 2020 on Wednesday morning.

Made by Doosan Mobility Innovation, the Long Endurance Fuel Cell Drone, which is powered by fuel cells, won a CES 2020 Innovation Award. It is the world’s first commercial hydrogen fuel-cell-powered drone, meaning it’s the first of its kind that can be mass produced.

“At this year’s CES, we’ve introduced the fuel-cell drone in the U.S market. Our plan is to really start business in the market in the second half,” Park said.

“Now that I’m seeing the field with my own eyes, I feel there’s much more to do,” he added, pinpointing artificial intelligence, cars and displays as fields he’s particularly thinking of focusing on during the trip.

At front and center of Doosan’s 483-square-meter (5,199-square-foot) booth were five robotic arms with D.J. equipment installed right beside them. Once an hour, a performance was held where they would dance to the music and push buttons. Upstairs, the same robot arm was working to carefully hand drip coffee in sophisticated circular motions.

Made by Doosan Robotics, these collaborative robots are intended to be used in factories or other industrial sites alongside humans. Industrial robots currently in use are big, heavy machines that can hurt people while they engage in repetitive work. Collaborative robots, on the other hand, were made to be small, flexible and sensitive enough to be stopped by a simple touch, making them safe for work near humans.

“The collaborative robots were the most popular - they dance and pour coffee so they instantly attract eyes - but people who have knowledge in technology showed more interest in our fuel-cell drone,” said a Doosan Group staff present at the booth.

The CES 2020 Innovation Award was displayed on the left of the robot arms. With eight propellers and a camera, the drone was able to run more than 2 hours with hydrogen fuel cells, an eco-friendly energy source. This is more than four times longer than conventional battery-powered drones, which can fly 10 to 30 minutes.

There have been prototypes of fuel-cell drones by other makers before, but Doosan is the first to have made mass production possible, the company says. The DS30 model started sales in Korea in October. But the product is too large to be used as a personal drone, at 80 centimeters (31.5 inches) in height with a 2.6-meter (8.5-foot) wingspan.

“It’s not for taking personal pictures but more intended for public use,” explained a Doosan employee. “It is useful for monitoring purposes like inspecting solar panels or water flows at lakes, delivering medicine to rural areas or for emergency relief. With lights attached it can also fly for night searches.”

Doosan Infracore presented a video and small models of unmanned Concept-X construction equipment - machinery and software that can scan a construction site with drones to automatically analyze the landscape and put unmanned excavators and wheel loaders to work.

“Doosan is currently pushing for a digital transformation in our manufacturing business and investing in potential fields,” said the company spokesman.