Moon is big on battery recycling and offers more support

Moon is big on battery recycling and offers more support 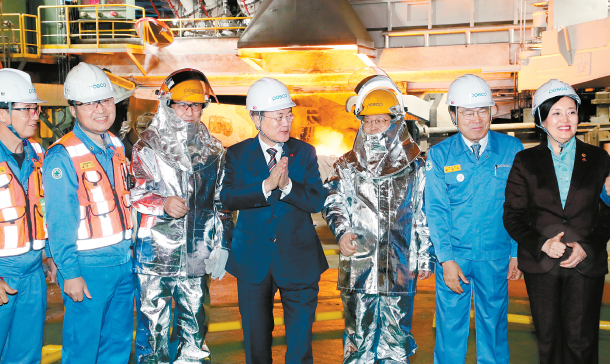 As the electric battery recycling industry is expected to grow from increased demand for electric vehicles, Moon identified it as a key target for the government.

The remarks were made while Moon was visiting a special regulation-free district in Pohang, North Gyeongsang, to attend a major investment ceremony involving GS Engineering & Construction.

GS Engineering & Construction has agreed to invest 100 billion won ($86.3 million) by 2022 to build a facility to collect and recycle used electric batteries at the Blue Valley National Industrial Complex, which is in the city.

“Pohang is a city with strength that is certain to achieve success in the battery industry and greatly contribute to increasing the competitiveness of Korea in the fourth industrial revolution,” Moon said in a speech during the ceremony. “If steel is the rice of industry, batteries are the rice of future industry.”

Pohang is home to Posco, one of the largest steelmakers in the world by output.

Producing and processing batteries for electric cars have become increasingly important for Korea, Moon said, as his government aims for producing a third of vehicles with eco-friendly options.

According to Bloomberg, the global secondary battery market is expected to grow from 17.9 billion won in 2015 to 600 trillion won in size by 2025.

The to-be-constructed plant, which would create more than 300 jobs and serve as an advanced base for Korea’s secondary battery industry, is expected to be capable of processing used batteries from as many as a thousand electric vehicles per year.

With such an investment, the Blue House projects North Gyeongsang to reach 800 billion won in secondary battery sector sales by 2022.

The province was picked last year as a special regulation-free zone for the next-generation battery recycling business. A total of 14 cities and provinces were declared free of regulatory limits last year for the development of key industries seen as future growth engines.

And to help with the initiative and revitalize the local economy, the president pledged to expand the regulation-free designation and provide additional funding.

The Blue House said in a statement that Moon’s trip to Pohang demonstrates his government’s commitment to new growth engines and “tangible” changes in the local economy with “regulation-related innovation.”

During his speech, Moon, on his third visit to the city during his term, also promised that his government will do its best to provide substantial compensation for victims of an earthquake that hit the area in November 2017. A special regulation was passed at the National Assembly on the matter late last year.

The president and SMEs and Startups Minister Park Young-sun later toured a Posco smart factory in the city, which the World Economic Forum picked last year as a “lighthouse factory” for the fourth industrial revolution.

Moon noted that the smart factory represents Posco’s drive to innovate manufacturing and asked the steelmaker to continue its efforts to drive sustainable growth for small- and medium-sized enterprises.

Posco is planning to supply 20 billion won to support the growth of a thousand small- and medium-sized enterprises by 2023.