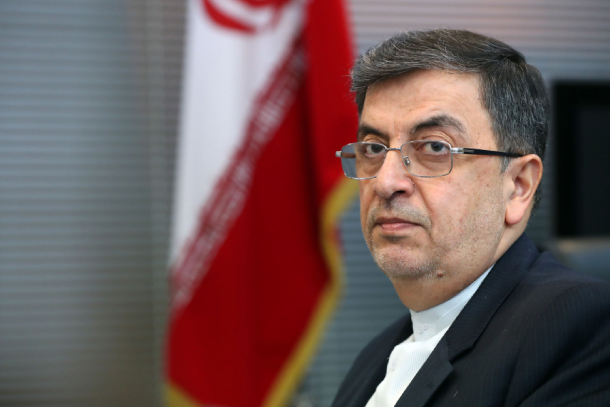 Iranian Ambassador to Seoul Saeed Badamchi Shabestari has an interview with the Korea JoongAng Daily at the Iranian Embassy in Seoul on Thursday. [KIM SEONG-RYONG]

Iranian Ambassador to Seoul Saeed Badamchi Shabestari said in an interview Thursday that Korea deciding to deploy troops to join the U.S.-led coalition in the Strait of Hormuz could possibly lead to Iran reconsidering its diplomatic relations with Korea.

“If another country conducts military activities within the Strait of Hormuz, we will not remain inactive,” said Shabestari as he sat for an exclusive interview with the Korea JoongAng Daily and JoongAng Ilbo Thursday at the Iranian Embassy in central Seoul to discuss Tehran’s latest tensions with Washington and its impact on relations with Seoul.

Seoul has found itself in a sticky position as Washington presses it to join a coalition to safeguard the Strait of Hormuz, the strategic waterway located between the Persian Gulf and the Gulf of Oman, where 20 percent of the global oil supply flows. Korea maintains that it is reviewing its options.

Korea has been tensely monitoring the situation unfolding in the Middle East following the killing of Iranian Maj. Gen. Qassim Suleimani, the powerful leader of the Quds Force of the Islamic Revolutionary Guards Corps, in a U.S. drone attack near the Baghdad airport last Friday.

A massive funeral procession was held Tuesday for Suleimani, who has been called a terrorist by the United States but is seen as a martyr and hero within Iran.

“The United States through martyring an Iranian hero stepped on the pride of the people of Iran, and if Korea decides to deploy troops at this moment, the Iranian people will find it hard to accept and be angered,” Shabestari said. “We do not want Korea to deploy troops.”

He added that the unity of the Iranian people mourning for Suleimani “can serve as a lesson for the United States.”

He added that in any retaliation, “our goal is not to kill any Americans but to show our firm intention to strike back as much as we were hit.”

U.S. Ambassador to Seoul Harry Harris said in a KBS interview Tuesday that he hopes Korea would send troops to the Strait of Hormuz to support freedom of navigation.

To Harris’s remarks, Shabestari said, “A third country should not interfere in the bilateral relations between Korea and Iran.”

When asked if there was a possibility of a full-blown war between the United States and Iran, the ambassador replied, “No, I don’t think so. I think both sides, they are trying to reduce tensions in the region, and I don’t think there will be war. But it depends on what will happen from the U.S. side.”

While Iran “prefers peace and stability” in the region, he added, “we are not looking for war, but if anybody hits, we can hit back.”

When asked if Korea’s deployment of troops in support of the U.S. coalition could lead to a severing of ties between Tehran and Seoul, Shabestari replied, “There could be an impact.”

He added that Korean businesses could also lose the Iranian market and Iran’s people may choose to boycott Korean products.

Korea already has to comply with U.S. sanctions on Iran, but even in the future when such sanctions are lifted, Korea could lose the market to countries like China, he added. “The United States is making relations between Korea and Iran difficult,” he added.

Iran on Wednesday launched missile attacks on two bases in Iraq housing American forces in response to the U.S. killing of Suleimani. The Pentagon concluded there were no casualties.

Iran’s Foreign Minister Mohammad Javad Zarif said in a tweet that Iran “concluded proportionate measures in self-defense” and does not “seek escalation or war.”

But he also added to the “people and leaders of Iran, we want you to have a future and a great future,” in remarks also seeming to de-escalate tensions.

Shabestari said that the economic sanctions by the Unites States “can also be a blessing in disguise” in that they have enabled Iran to become self-sufficient.

In May 2018, Trump withdrew from the 2015 Iranian nuclear deal, or the Joint Comprehensive Plan of Action, signed by Iran, the United States, Britain, France, China, Russia and Germany.

Shabestari said that Iran plans to take steps back from the 2015 nuclear deal because the other signatories are not keeping their promises but stressed that Iran “does not plan to withdraw” from the 2015 deal.

He added that Iran will continue to allow inspectors from the International Atomic Energy Agency, the global nuclear watchdog, to monitor Iran’s declared nuclear sites.

Shabestari also said there is “no chance at all” that there may be covert cooperation between Iran and North Korea for nuclear and missile provocations, adding “North Korean and Iranian nuclear activities are 100 percent different, and Iran hopes for the denuclearization of the Korean Peninsula.”

South Korean Foreign Minister Kang Kyung-wha said that a 24-hour emergency response system is in operation until the situation in the Middle East stabilizes as she briefed the National Assembly’s foreign affairs committee Thursday. On Wednesday, Kang convened a video conference meeting with Korean ambassadors in Iran, Iraq and Israel and instructed the Ministry of Foreign Affairs Wednesday to take active measures to ensure the safety of Koreans in the region.

Seoul has not yet determined a withdrawal of Korean nationals from the region is necessary, though there were travel warnings implemented for parts of Iran at the beginning of the week. There are around 200 Koreans living in Iran.

On the U.S. request for the deployment of Korean troops to the Strait of Hormuz, Foreign Minister Kang said to the parliamentary foreign affairs committee Thursday, “The U.S. position and our position, in an analysis of the situation and taking into consideration bilateral relations with countries in the Middle East, won’t necessarily always be the same.”