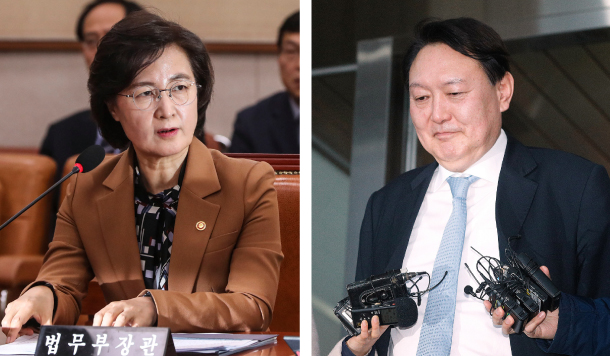 The Ministry of Justice abruptly reassigned prosecutors who have been investigating abuse of power and corruption allegations against key members of the Moon Jae-in administration and effectively demoted Prosecutor General Yoon Seok-youl’s closest aides.

The ministry announced Wednesday evening that 32 senior members of the prosecution will be moved to new posts as of Monday. According to the ministry, 10 prosecutors were promoted to serve as heads of five high prosecutors’ offices and five district prosecutors’ offices, and the remaining 22 were reassigned to other jobs.

According to the ministry, Han Dong-hoon, head of the anticorruption and organized crimes department of the Supreme Prosecutors’ Office, was named as deputy head of the Busan High Prosecutors’ Office. Han was the lead prosecutor in the investigations into academic and financial transgressions allegedly committed by former Justice Minister Cho Kuk and his family.

Bae Seong-beom, head of the Seoul Central District Prosecutors’ Office, who oversaw investigations into both cases, was named head of the Institute of Justice, a research institute run by the ministry in North Chungcheong.

Although those three appointments were technically promotions, they are less important posts outside the main office of the prosecution in Seoul.

Yoon Dae-jin, known as the closest ally of Prosecutor General Yoon, was named deputy head of the Institute of Justice.

The reshuffle, instituted by newly sworn in Justice Minister Choo Mi-ae, effectively dismantled Prosecutor General Yoon’s team, although each individual played key roles in bringing Moon Jae-in to power. They investigated and indicted former President Park Geun-hye and her associates for corruption and abuse of power.

After Moon took office in May 2017 and promoted his campaign to eradicate so-called accumulated evils, they conducted probes into corruption allegations against the past two conservative administrations of Park and predecessor Lee Myung-bak.

“The Justice Ministry’s reshuffle of the prosecutors is a message that the prosecution must not go after any crimes linked to the Moon Blue House,” said Rep. Jun Hee-kyung, spokeswoman for the main opposition Liberty Korea Party. “The Moon administration is trying to exonerate itself by carrying out this barbarous reshuffle to avoid investigations.”

The ruling Democratic Party (DP), however, hailed the reshuffle. “The appointments reflected each prosecutor’s ability and fitness for a job,” said Rep. Lee Jae-jung, spokesman for the DP.

A prosecutor with a special history with Moon was appointed to one of the most powerful posts in the prosecution. Lee Seong-yun, head of the prosecution bureau of the Ministry of Justice, was named to head the Seoul Central District Prosecutors’ Office, the largest prosecutors’ office in the country.

During the Roh administration, Lee was dispatched to the Blue House to serve as a special inspection team leader from 2004 to 2006 and worked with Moon, who was senior presidential secretary for civil affairs.

In 2014, Lee, who was head of the Mokpo District Prosecutors’ Office, headed the joint investigation of the prosecution and the police into the Sewol ferry accident in 2014.

There was a lot of recent speculation that Justice Minister Choo would recruit officials from outside to head key bureaus in the Justice Ministry that oversee personnel affairs and budgets for the prosecution.

That plan, however, fell through as Choo’s candidates failed to satisfy required qualifications. Instead, two senior prosecutors, Jo Nam-gwan and Sim Wu-jung, were appointed as the head of the Criminal Affairs Bureau and Planning and Coordination Bureau, respectively. Jo was the special inspection team leader of the Roh Blue House from 2006 till 2008.

Top vacancies in the Supreme Prosecutors’ Office, created after Yoon’s confidants were removed, were filled with prosecutors favored by Choo.

Sim Jae-chul, first deputy head of the Seoul Southern District Prosecutors’ Office, who prepared Choo for her confirmation hearing last month, was promoted to head of the anticorruption and organized crimes department.

According to prosecution sources, Choo did not consult with Prosecutor General Yoon in advance about the reshuffle.

“This is an overt attempt to dismantle the investigations [against the administration],” a senior prosecutor said.

After Moon formally appointed Choo as justice minister last week, a massive reshuffle was expected. The announcement was made abruptly Wednesday evening.

Choo left her office at the government complex in Gwacheon, Gyeonggi, around 4 p.m. Wednesday and headed to the Blue House, presumably to brief Moon about her plan.

Two hours after Choo left the Blue House, the ministry announced the reshuffle around 7:30 p.m. “I have never seen a reshuffle announced after sunset,” said a prosecution official.

Legal sources said the reshuffle was a political amputation of Yoon’s authorities. They said prosecutors loyal to the administration were appointed to the vacancies left by Yoon’s allies.

Prosecutors worry about the probes into the members of the Moon administration. “We did expect this reshuffle of senior prosecutors to come,” said a prosecutor. “What we are more worried about are the follow-up reshuffles of prosecutors who will actually conduct probes. Most of them will not have background knowledge on how the probes have progressed so far, but the ministry just removed all the heads of the cases.”

Senior prosecutors who were politically purged said they won’t resign. “I have no intention to step down,” said Han Dong-hoon, who oversaw the probes into Cho and his family. “I will do my best as a public servant wherever my position will be.”