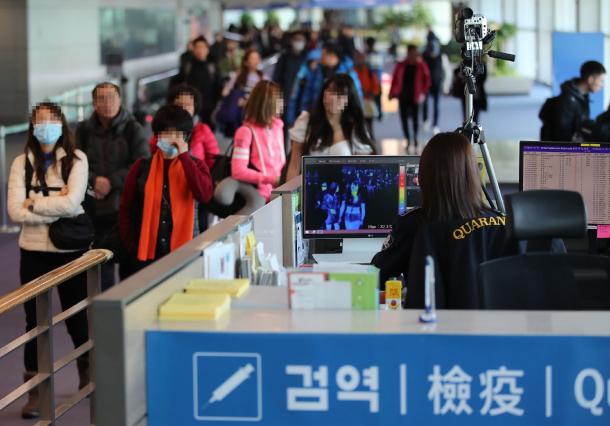 Quarantine officials check passengers arriving from China with infrared thermal imaging cameras to detect fevers at the arrival terminal of Incheon International Airport on Thursday. Health authorities put a sick 36-year-old woman from China under quarantine Tuesday in a hospital just south of Seoul amid concerns she might be Korea’s first case of a pneumonia-like illness that broke out in China last month. [YONHAP]

Health authorities put a sick 36-year-old woman from China under quarantine Tuesday in a hospital just south of Seoul amid concerns she might be Korea’s first case of a pneumonia-like illness that broke out in China last month whose cause remains unknown.

The Korea Centers for Disease Control and Prevention (KCDC) said the Chinese national, who works in Korea, was sent to Seoul National University Bundang Hospital Tuesday in Seongnam, Gyeonggi, shortly after she was diagnosed with pneumonia at a different hospital earlier that day. She told nurses at the first hospital she recently came back from a business trip to Wuhan in central China.

Wuhan is the center of an outbreak of an illness that’s infected dozens of people and has possibly spread to Hong Kong.

Upon learning about the Chinese woman’s visit to Wuhan, the first hospital, Hallym University Dongtan Sacred Heart Hospital in Hwaseong, Gyeonggi, informed state health authorities, and she was transferred to Seoul National University Bundang Hospital, a government-designated hospital for isolated treatment, according to the KCDC.

KCDC officials said Thursday that the patient was in stable condition and is improving.

It is not known whether her illness is the same as the outbreak in Wuhan or whether her Wuhan trip definitely triggered the illness. Officials at the Ministry of Health and Welfare said Wednesday they couldn’t tell because Chinese officials haven’t figured out the pathogen behind the mysterious outbreak yet.

The World Health Organization and Chinese authorities have yet to find any evidence that the new virus is spread by humans, which would make it far more dangerous, and it has not been tied to any deaths.

China’s state-run Xinhua News Agency reported Thursday that “preliminary” lab results showed “a new-type coronavirus” is the cause of the viral pneumonia in Wuhan, citing a Chinese expert who led a team to evaluate pathogen test results.

According to Xinhua, a total of 59 people have been made ill by the new virus in Wuhan as of Sunday, with seven in serious condition. Eight people have been cured of the disease and discharged from the hospital, said the Chinese report.

The Chinese patient in Korea visited Wuhan from Dec. 13 to 17 for a business trip with a colleague from the same company, according to the KCDC. The colleague is fine.