Having made his KBO debut with the LG Twins in 2002, Park Yong-taik is working harder during his final season as a Twins player. 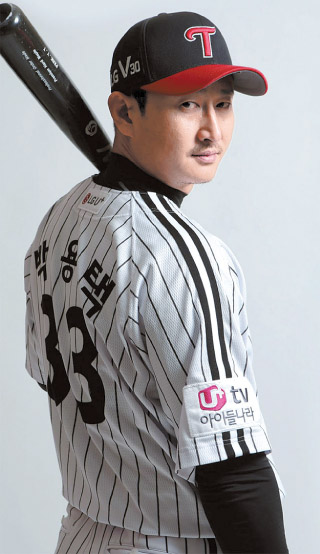 In February 2019, Park signed a two-year contract with the Twins. Just like Lee Seung-yuop, formerly of the Samsung Lions and Lee Ho-jun, formerly of the NC Dinos, Park also said he would retire at the end of the contract. Due to this, Park is calling it quits after 30 years in the sport, ending a career that started in 1990.

Park made his KBO debut with the Twins in 2002 after graduating from Korea University. In his debut season, the Twins advanced to the postseason by finishing fourth in the regular season. Having played the first and the second round of the playoffs, the Twins advanced all the way to the Korean Series but couldn’t go all the way as they lost to the Samsung Lions with a record of two wins and four losses.

It was an unforgettable season for Park as he got to experience the Korean Series in his rookie season. But since then, throughout the past 18 years, Park and the Twins couldn’t get there. Due to this, this season is his last chance at a win.

“After playing this long [in the KBO,] I never thought that I’ll be preparing for my final season without a win,” Park said. “New Year’s events can be tiring to the players. But now, I don’t want to waste those times. It also feels special. It feels weird when thinking that this year will be my last, but when I start training, those thoughts disappear. Once the season starts, I think I’ll feel a little more comfortable.”

“I also couldn’t win back when I was a player,” said the Twins manager Ryu Joong-il. “I heard Yong-taik’s dream is to retire after LG wins. I hope he can achieve that dream this year.”

Last season, the Twins finished fourth in the regular season. Despite the predictions that the Twins will finish fifth, the last postseason spot, they’ve comfortably maintained the fourth-place spot throughout the season. They defeated the Dinos in the wildcard game to advance to the first round of the playoffs, but their postseason didn’t last too long.

Their season quickly ended by losing to the Kiwoom Heroes in the first round of the playoffs. This season, the Twins will give it another try with the exact same players.

The Twins somewhat strengthened their infield by signing veteran infielder Jeong Keun-woo from the Hanwha Eagles, through the second round draft.

“I probably can’t make any comparisons with other clubs, but throughout my 19 years playing for LG, I think we have the highest chance of winning [this year],” Park said. “Honestly, it was hard to say that we would be the team to win last year. This year, our pitchers are at the top level, and the starting batters are at the peak of their career, in the early 30s. I want this season to be the year where I can finish with a win.”

Although he may not be able to play full-time in the upcoming season, Park is still working hard to fulfill his role, whether it’s as pinch hitter or anything. To do so, Park has been on a diet, where he recently lost about 5 kilograms (11 pounds).

“Last year, I couldn’t play a lot due to an injury,” Park said. “This year, I’m just focused on my physical condition.”

Looking at Park’s career, he’s already had an impressive record as he currently leads the league in all-time career hits, at 2,439. But it’s not only the hits. His numbers are impressive overall as he has a 0.308 batting average with 2,439 hits and 211 home runs throughout 2,139 games over 18 seasons.

Each and every one of his hits in the 2020 season will be a new record in the KBO.

“If possible, I want to hit 200 more,” Park said. “I really don’t have a personal goal. Even if I don’t do anything and just tag along for the journey from the younger players’ performance, I want to win.”

Based on his 2019 statistics, Park may be able to add a lot more hits in the upcoming season, if he can stay healthy. Despite playing in only 64 games in 2019, Park finished with a 0.282 batting average with 55 hits and one home run.

“If we win, I think I can do anything,” Park said. “Gathering a small group of 33 players [also Park’s jersey number] and walking around all the baseball stadiums around Korea may be a good idea.”

Bae unexpectedly got on the mound in the ninth inning and finished the series by taking the last three out. Following the win, Bae announced his retirement.

Park dreams of being the next Bae this year.

“I got goose bumps watching Young-soo,” Park said. “I may be dreaming, but I want to hit the winner during the seventh game of the Korean Series, while the count is two outs at the bottom of the ninth.”