The Korean men’s and women’s volleyball teams have kept their chances for the 2020 Tokyo Olympics alive. 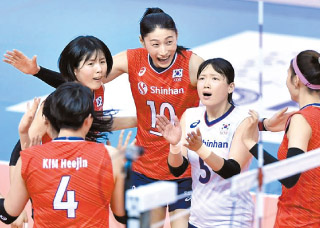 The Korean women’s volleyball team celebrates after getting a point against Kazakhstan in a Pool B match of the Asian qualifier for the Tokyo 2020 Olympics at Korat Chatchai Hall in Thailand on Thursday. [YONHAP]

Korea beat Kazakhstan to win its group in the preliminary round of the Olympic women’s volleyball qualifying tournament on Thursday.

Lee Jae-yeong put up 18 points, helping world No. 9 Korea past the 23rd-ranked Kazakhstan 3-0 (25-20, 25-16, 25-21) for its third straight victory in Pool B at Korat Chatchai Hall in Nakhon Ratchasima, Thailand. Korea didn’t drop a set during the preliminary stage.

The winner of this tournament will compete at the 2020 Tokyo Olympics.

Both Korea and Kazakhstan had secured their semifinals berths with victories on Wednesday, and Korea clinched the top seed in Pool B with Thursday’s win.

As the Pool B winner, Korea will face the Pool A runner-up, Chinese Taipei, in today’s semifinals, beginning at 3:30 p.m. local time, or 5:30 p.m. in Seoul. Korea is 30-3 all time against Chinese Taipei and has won three of the past four meetings, dating back to 2017.

The other semifinal match will pit Kazakhstan against the Pool A winner, Thailand, starting at 6 p.m. local time.

Barring a major upset, Korea and Thailand are expected to clash in Sunday’s final. Korea is pursuing its third straight appearance in the Olympics, while Thailand has never played in the Olympics.

She was taken out of the game when the team held a 16-15 lead. Other attacking stars, Kang So-hwi and Lee Jae-yeong, stepped up their games and put Korea ahead 22-18. And Lee scored the set point with a powerful spike.

On the men’s side, it managed to advance to the semifinals of the Asian Olympic men’s volleyball qualifying tournament on Thursday, by defeating Qatar in a five-set thriller to stay alive in the competition.

Korea nearly blew a 2-0 set lead and was down 9-7 in the fifth set before staging a late rally.

Korea finished second in Pool B, behind Qatar, and those two countries are moving onto today’s semifinals. Korea’s last appearance in Olympic men’s volleyball came at Sydney 2000.

Qatar, which defeated both India and Australia 3-0, still finished first in Pool B with seven points. A 3-0 win and a 3-1 win are both worth three points, and a 3-2 win is worth two points for the winner and one point for the loser.

Korea opened the tournament with a 3-2 loss to Australia but defeated India 3-0 and then had another five-setter on Thursday, earning six points.

Later Thursday, Iran defeated China in straight sets to win Pool A, setting up a semifinals showdown against Korea on Saturday at 4 p.m. local time, or 5 p.m. in Seoul. Korea is 13-14 against Iran but has lost nine of the past 10 meetings, including the last five in a row.

Coached by Im Do-hun, Korea faced a must-win situation against Qatar, which stunned No. 15 Australia in straight sets on Wednesday.

But Korea came out firing early on, taking a 7-1 lead in the first set and building a seemingly comfortable 18-8 advantage. Qatar got it to 19-16 before Jung Ji-seok and Choi Min-ho went on a tear to take the set at 25-18.

Korea dropped the next two sets, as Qatar shored up its defense. And in the deciding fifth set, Korea battled to take a 12-11 lead. And with a 14-13 lead, Korea lucked into the win thanks to Qatar’s blunder with the serve.