Life’s a catwalk for Korea’s most senior model

Life’s a catwalk for Korea’s most senior model 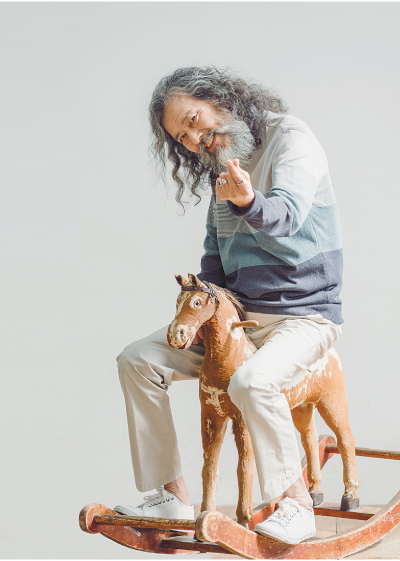 Gim Cil-du, 64, talks about his life during an interview with the JoongAng Ilbo at a cafe in Gangnam District, southern Seoul, on Dec. 27. [THE SHOW PROJECT]

Gim Cil-du is a senior citizen by almost any definition.

But the 64-year-old Gim hardly feels old, because his lifelong dream has just started to come true.

Gim is one of Korea’s newest fashion models.

“You become elderly as soon as you start to fear aging,” Gim said. “I feel thankful that I’m aging very naturally. I became a model because I was old. I’m so happy now. Actually, my heart is filled with enthusiasm.”

Gim, who was born in 1955 in Siheung, Gyeonggi, dreamt of being a model when he was in high school. He gave up on his dream due to his family’s financial difficulties.

Gim became a jack-of-all-trades. He worked as a fish merchant, fruit and vegetable merchant and a part-time laborer.

At the age of 40, he opened a sundae (blood sausage) restaurant, and that was his ticket to success. Gim said the restaurant in Siheung was so busy he didn’t even have time to shave. After a few years, he opened branches and even built a sundae factory.

Unfortunately, he expanded too aggressively. After 15 years in the business, he lost everything. In December 2017, Gim and his family moved to Seoul with barely enough money that he could barely rent a room.

His daughters got part-time jobs while his wife started working at a restaurant. When Gim proposed becoming a chauffeur, it was his oldest daughter who had the eureka moment. “You wanted to be a model in the past,” she said. “Now it’s time to pursue your dream.”

According to Gim, his daughter discovered an academy that provided training for seniors who wanted to be models. In 2018, Gim started toward his goal by taking four hours of classes everyday.

In less than a month, Gim got a call from a modeling agency.

His life was about to change.

Gim’s wrinkles and white beard are, in fact, the reasons for his success as a model.

“Why would I use my money to dye my hair to look younger? Aging is natural,” Gim said. “People should stop thinking ‘Why am I so old?’ That kind of thinking makes them age faster.

“Walking down a runway in a fashion show is just a dream for many young people,” Gim said. “It seemed like a miracle to me that I got this opportunity at my age.”

A key to enjoying the best years of your life is to not worry, Gim stressed.

“I take care of every moment of everyday. I try to stay positive even when I have to go through an ordeal,” said Gim.