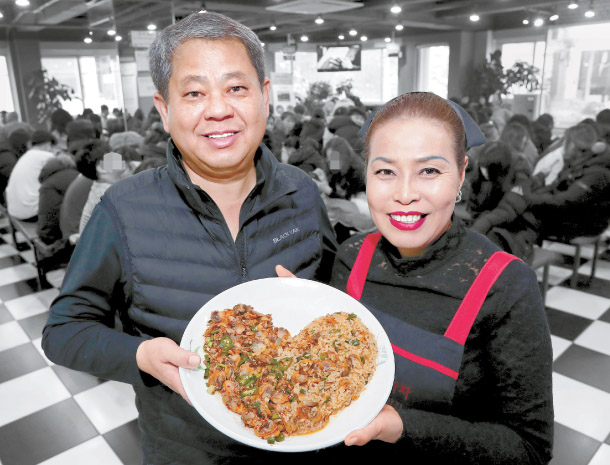 A middle-aged couple who run a successful chain of cockle restaurants have never forgotten their woebegone days of poverty and drunkenness. They believe in giving to charity — and also making their own children pay rent for the apartments they lease from them.

Choi Geun-yeong, 61, and his 53-year-old wife Kim Mi-ja donated 200 million won ($171,000) last year and became members of the Honor Society of the Community Chest of Korea, one of the largest charities in Korea.

The JoongAng Ilbo met with the couple on the second floor of their main restaurant in Gangneung, Gangwon, on Dec. 27 to hear their life stories.

Choi was born in Beolgyo, South Jeolla, and moved to Seoul at 14. After earning a bachelor’s degree in civil engineering from Inha University, Incheon, he was hired by a conglomerate. In 1997, at the age of 40, he was made an executive.

According to Choi, life was good. He drove a Kia Enterprise sedan and lived in a 2,491-square-foot villa in Songpa District, southern Seoul.

Then he became overambitious. Choi established his own construction company and built buildings all over the country. But the Asian economic crisis bankrupted his customers. Eventually, Choi went broke and even lost his own residence.

Choi and his wife moved into a basement that rented for 300,000 won ($256) a month. Their two sons, who were in elementary and junior high school, stayed with his mother.

“Me and my wife were always drunk, and once we even thought about committing suicide,” Choi recalled. “I was able to pull myself together when I got a part-time job at a samgyeopsal [grilled pork belly] restaurant.”

After a few years, the couple bought a small, used food truck and started selling tteokbokki (rice cakes in red pepper sauce), eomuk (fish cakes) and sundae (blood sausages). This was the toughest time of his life, Choi said.

“[As we sold tteokbokki and sundae on the truck], nearby restaurants cursed us and reported us to the police,” Choi recalled. “I felt sorry but was resentful at the same time. My heart, more than my body, was just so full of pain.”

The couple started operating a street food cart in Dongbu Market, Gangneung. Saving money was impossible no matter how hard they worked. And most days, they only got three hours of sleep.

It was in 2014 that the couple’s life started to turn around.

“We noticed that many people mixed cooked rice with seasoned cockles and served it as a side dish,” Choi said. “We created a new menu item called cockles bibimbap [rice and mixed vegetables]. Since then, so many young people visited our food cart and took photos of our food. Also, our food cart was on television several times after celebrities visited us.”

In 2018, the couple bought a three-story building in Ponam-dong, Gangneung, and opened a restaurant on the first floor. They bought another building nearby and opened a second branch. A third branch was opened in Sokcho, Gangwon, which is run by Choi’s younger brother. There are now eight branches, including in Seoul and Gyeonggi.

The couple now owns the two buildings and a parking lot. The value of their property is about 2 billion won, and half of that is financed with a bank loan, according to the couple.

The couple lives on the third floor of their original building in Ponam-dong. Their two sons and Choi’s mother live in the couple’s other building and all pay monthly rent.

When a reporter asked Kim why they didn’t buy houses for their sons instead of donating to charity, she said, “The fastest way to ruin your children’s lives is to raise them without making them realize the preciousness of money. I pay them the same amount of money as other employees.”

According to the couple, they made their donation as a token of their gratitude to people who spread the word about their restaurants.

“If you put off making donations, you’ll never do it,” Kim said. “Since we had a hard time in the past, I understand how needy people can be and how they feel.”

Park Seon-ok, a 42-year-old employee at the couple’s restaurant, described them as warm-hearted people.

“One day, I told them that my family was having a hard time, and they lent me 10 million won saying that I could pay it back slowly,” Park said. “The employees of our restaurant get paid more than those of other establishments as well.”

The 200-million-won donation was not their only good deed. The couple donates about 1 million won every month to a nearby youth center. They donated 10 million won to the city of Sokcho when a fire broke out last April. According to the Community Chest of Korea, the couple recently contributed an additional 5 million won as a year-end donation.

Although it has been over 10 years since the couple came to Gangneung, they said they’ve never had a dip in the East Sea or visited the beach.

When the reporter asked about any plans to travel abroad, Kim said, “I don’t even have a passport.”

Choi said, “I feel sorry for my younger sister, who lives in Canada, because I haven’t been there even once.”