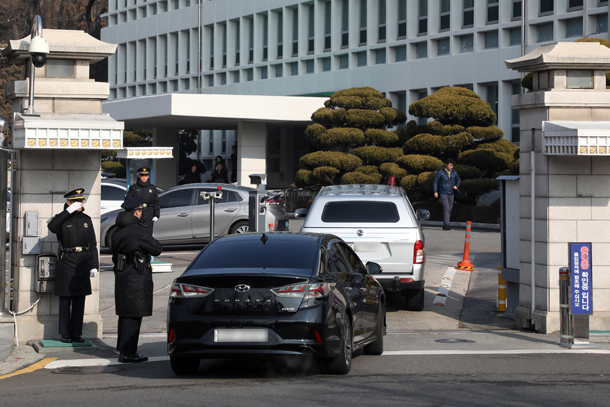 Prosecutors raided the Blue House Friday for documents corroborating allegations that the Moon Jae-in presidential office meddled in the 2018 Ulsan mayoral election to help the candidate from the ruling Democratic Party (DP) win.

The Seoul Central District Prosecutors’ Office announced that it dispatched prosecutors and investigators to the office of the Blue House secretary for local autonomy and balanced development at 10 a.m. to accept related papers without physically entering the main Blue House premises.

The team of prosecutors and investigators specifically asked for documents related to Ulsan’s urban development policies, based on suspicions that the Blue House and the former DP candidate - current Ulsan Mayor Song Cheol-ho - discussed policy issues and fine-tuned their differences ahead of the election.

A former Blue House official who worked for the secretary for balanced development is believed to have met Song and Song Byung-gi, a campaign operative who is now the Ulsan vice mayor, in January 2018, five months before the Ulsan mayoral election on June 13, to talk about plans to build a public hospital and an outer ring road in the southeastern metropolitan city.

The balanced development office was in charge of managing the implementation of President Moon’s local development policies and overseeing the central government’s distribution of subsidies to local government offices.

The Blue House expressed “deep regret” about the raid Friday afternoon and said prosecutors seemed to be simply “showing off” to the public.

Blue House spokeswoman Ko Min-jung said prosecutors arrived at the Blue House asking for “every criminal document” within the office of the secretary for local autonomy and balanced development, “without specifying which kind of data they were trying to confiscate.”

The Blue House raid came only a day after Seoul prosecutors raided the office of the Presidential Committee on Balanced National Development, located inside the Seoul Central Government Complex in Gwanghwamun, central Seoul.

Ulsan Mayor Song served as an adviser to the committee from November 2017 to March 2018. Song’s campaign pledges mostly mirrored the policies relayed by the presidential committee in January 2019, and prosecutors suspect the Blue House tipped Song off about the government’s national development plans in advance, when he was running for mayor as a DP candidate.

The Seoul Central District Prosecutors’ Office has been investigating allegations that the Blue House meddled in the 2018 Ulsan mayoral election by pressuring Ulsan police to investigate former Ulsan Mayor Kim Gi-hyeon and his aides shortly before the election on possible corruption allegations to sway public opinion against Kim.

Kim, at the time, was vying for a second consecutive term based on support from the main opposition Liberty Korea Party. Ulsan prosecutors later cleared Kim and his aides of those charges.