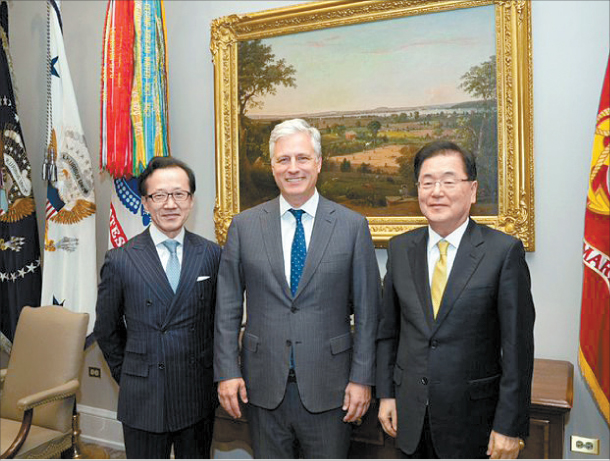 Chung spoke to reporters at Incheon International Airport upon his return from a brief meeting with Trump in the White House.

Chung did not explain what Trump’s message to Kim said. Chung, director of the Blue House National Security Office, also did not elaborate how Seoul sent the message to Pyongyang.

Trump’s birthday message came amid stalled denuclearization talks between Pyongyang and Washington and shortly after the North signaled it may abandon its moratorium on nuclear and intercontinental ballistic missile testing, though the regime hasn’t followed through with any tests.

Local analysts wonder whether Trump’s message to Kim might bring the discussions back on track, as previous exchanges of letters between the two leaders did.

Chung continued that Trump’s message to Kim has been conveyed through “an appropriate method.”

In a terse statement Wednesday night, the White House said the three men met “briefly” and that Trump mentioned South Korea and Japan were among the strongest American allies in the Indo-Pacific region. Trump was also quoted as mentioning the “deep friendship” the United States shares with the two countries.

According to sources with knowledge of the three-way discussion, the meeting occurred on very short notice. Chung, Kitamura and Trump’s National Security Adviser Robert O’Brien were talking to each other at the White House on Wednesday afternoon, when Trump learned about the arrival of the two foreign guests and asked they hold a short meeting.

Chung had arrived in Washington Tuesday for trilateral discussions with his U.S. and Japanese counterparts to talk about Korean Peninsula affairs and possibly rising Middle East tensions and the matter of Seoul’s deployment of troops to the Strait of Hormuz.

Seoul has found itself in a sticky position as Washington presses it to join a coalition to safeguard the Strait of Hormuz, the strategic waterway located between the Persian Gulf and the Gulf of Oman, where 20 percent of the global oil supply flows. Korea maintains that it is reviewing its options.

“It was a very valuable time,” Chung replied Friday when asked about the meeting with Kitamura and O’Brien.

Asked whether he talked about South Korea’s possible deployment of troops to the Strait of Hormuz during his meeting with American officials, Chung said the deployment issue wasn’t “directly mentioned.”

“With the Hormuz deployment issue, as you all know, [the South Korean government] is still reviewing how to deal [with the issue],” Chung said, “based on the principle that we must protect the safety of our public and companies, [support] freedom of navigation in the Strait of Hormuz and contribute to international efforts for safety.”