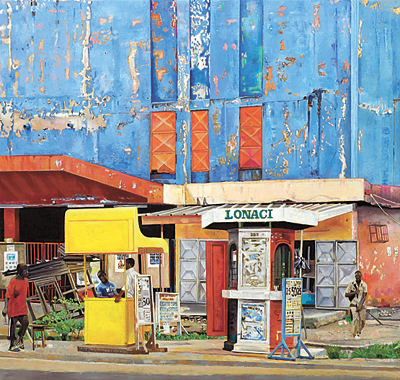 CHEIKH NDIAYE: ARCHIVES OF THE SUN

To Jan. 28: Senegalese artist Cheikh Ndiaye’s first solo exhibition in Korea, “Archives of the Sun,” is a chance to see the cityscape of post-independent West Africa in Seoul.

Ndiaye was born in Dakar, Senegal, 10 years after the country was liberated from France. Rather than depicting the socio-political chaos that he experienced directly, he painted the city’s peaceful scenery - the buildings sitting in the bright sun and the people walking the streets like always.

The skies in all his paintings are bright blue without any clouds, putting the focus on the buildings and the people.

“It’s the relationship between the architecture and the people in it that does the talking,” gallery’s director Jason Haam explained.

Ndiaye’s works have been displayed at Centre Pompidou in France, and some are owned as the museum’s collection.

Admission is free. Get off at Anguk Station, line No. 3, take the Jongno 02 bus and get off at the Sungkyunkwan University Back Gate stop. Walk 10 minutes.

Through Feb. 1: An artist of the Light and Space movement, Helen Pashgian’s first solo exhibitions opened in Asia at Lehmann Maupin’s Seoul and Hong Kong galleries, with eight works by the artist on display in Seoul.

Based in Los Angeles, Pashgian started playing with the idea of light in the 1960s along with artists such as James Turrell, Robert Irwin, Larry Bell, Mary Corse, DeWain Valentine and Peter Alexander and made her mark by developing her unique method of using resin to bring out the beauty of industrial materials.

The Seoul exhibition spans from her black epoxy work created in 2006 to her latest 6-inch-diameter spheres made with cast epoxy with resin (all of which are untitled).

“She transforms these raw materials onto ethereal works that give the illusion of both containing and emanating light,” explains the gallery.

Admission is free. Get off at Anguk Station, Line No. 3, exit 1, and walk five minutes. 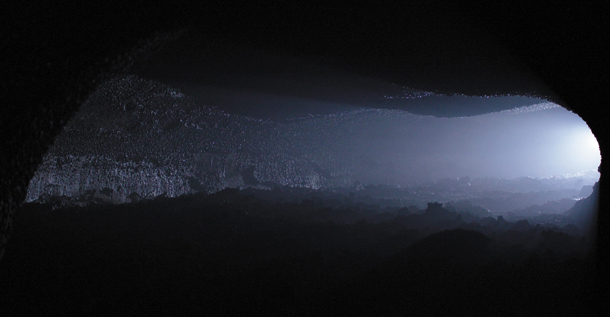 Chosen among 260 contestants for the award, the four artists all flaunt their world of art each with their distinct style and philosophy.

Lee, who majored in eastern art, presents paintings on the topic of women’s genitals, while Kwak highlights issues with contemporary architecture in her installation.

One artist will be awarded the grand prize later this month.

Admission is free. Get off at Apgujeong Rodeo Station, Bundang Line, exit No. 2 and walk five minutes.

Through Feb. 22: Chinese artist Chen Yujun, born in 1976, is a leading figure in the second generation of Chinese contemporary art.

For the gallery’s first exhibition of the new year, 30 new works by Chen are on display.

Unlike his former works that did not include the human figure, his latest works both directly and indirectly depict human beings in various states.

Starting from the artist’s very own personal experiences, he expands the discussion to the bigger community and society - focusing on the idea of home and finding a home.

A 5-meter (16-foot) wide collage of newspapers titled “Space of 11 Square Meters” has been created just for the gallery, with each newspaper symbolizing the different chaotic moments in history.

“Wedding Banquet No. 4” talks about the formation and dissipation of communities, through a chaotic image of a wedding banquet - a traditional gathering ritual.

Through March 1: As a part of the celebration of the 50th anniversary of Gallery Hyundai, the gallery takes a look at the history of Korean modern painting through portraits of people created during the 20th century.

Across the two exhibit spaces of the gallery, 71 portraits by 54 artists are on display.