40s, jobless and with no real skills

40s, jobless and with no real skills 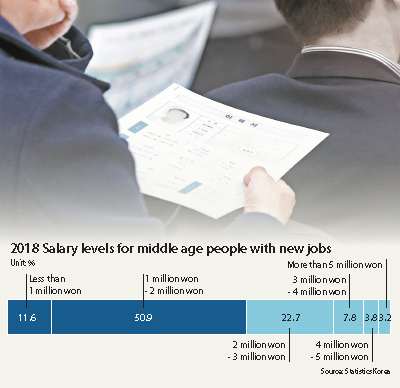 Winter has come for middle-aged workers as many major local companies are preparing to cut employees, especially those in their 40s and above.

Many employees are finding retirement age approaching fast, but finding new employment for them isn’t so easy. In difficult economic times companies are not hiring much.

According to government data, the hiring rate for those in their 40s, which President Moon Jae-in said needs “special measures,” declined last year even though the government poured in funding to boost employment. The employment rate for those in their 40s was 78.4 percent in November last year, down 1.1 percentage points from the same month a year earlier. The decline has been ongoing for 22 consecutive months, the longest period since 1999.

People in this situation include a 45-year-old surnamed Kim, who recently re-entered the job market after being forced to retire as an insurance agent for underperformance.

Although Kim worked in many office jobs in his 20s and 30s at many companies, he said he didn’t have the skills to attract the employers. Job applications he now submits are returned with rejections citing his age level.

“Even if I submit applications to around 10 companies, only one or two of them invite me for an interview, so even the initial paper application process is challenging for me,” Kim said.

The job-finding difficulties for those in their 40s and 50s are even more threatening than it may seem on the surface, as many of those in those age groups have families to feed. If they aren’t making money, their households ultimately find themselves in a lower-income bracket.

Even after landing a new job, misfortunes continue. The same survey found that 67.1 percent of those who found new jobs worked for the new company for less than two years, with only 7.7 percent of them staying in their new jobs for more than five years.

New salary levels also turned out to be disappointing for the new workers. More than 26 percent of those who found new jobs were making less than half of what they made in their previous jobs, and 21.3 percent of rehired middle- and old-age workers were being paid between 50 percent and 60 percent of their previous wage levels.

For those in their 40s and 50s, their age level requires more spending, and without new employment, they have two major obligations - serving their parents and educating their children - simultaneously, which is why many of them still work for lower salaries.

“Many of those finding new jobs previously had office jobs, but most of the new jobs available are manual labor positions,” said Kim Dong-joon, a spokesperson at a government-sponsored job-finding center.

“This mismatch is one of many factors that is making finding new job opportunities for middle-aged workers more difficult.”

Experts say the problem can’t be fixed in the short term, as structural problems, like the weak economy and rising labor costs, are standing in the way of a job market recovery.

“As we are more reliant on extremely short-term jobs from the government, which is pouring in an unprecedented amount of funds for job creation, the number of high-quality jobs from the private sector is falling as a side effect,” said former Statistics Korea Commissioner Yoo Gyeong-joon, who now is a professor at Korea University of Technology and Education.

The Moon administration, recognizing the problem, is having Korea Polytechnic University institute more training programs for those unemployed in their 40s or older and decided to expand its financial support for employment of those between 35 and 69. Specific details of the measures are expected to be released in March.