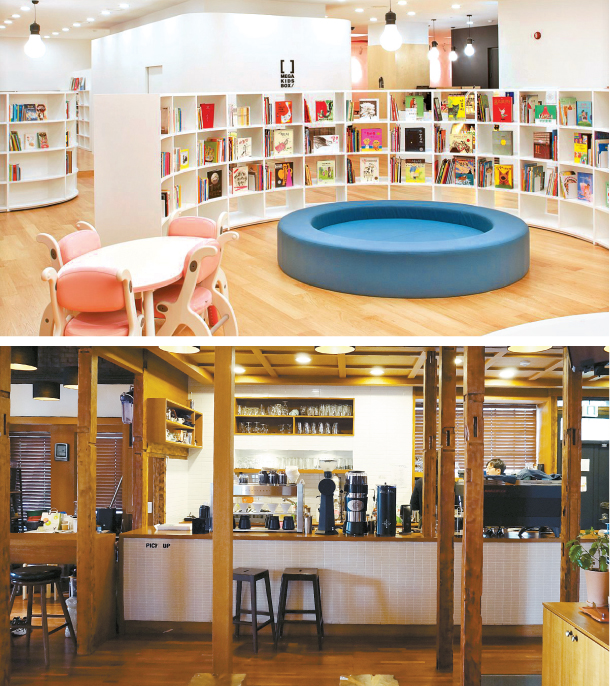 Top: A kid-friendly theater in Megabox’s Yeongtong branch in Suwon, Gyeonggi, is a multi-purpose space fit with a children’s library, bathrooms and the screening room. Above: The House 1932, a cafe near Seoul Station that has been renovated out of a house dating back to 1932, has implemented a no-kid zone only on its third floor. [MEGABOX, ESTHER CHUNG]

More parents with young children in Korea are in support of so-called “no-kid zones.”

“Depending on the purpose of the place, I think it’s okay to have no-kid zones,” Kim, a father of a 17-month-old daughter, told the Korea JoongAng Daily on Jan. 8. “Like in theaters, for instance.”

Kim, a man in his 30s who lives with his wife and their daughter in Seongbuk District, central Seoul, is not alone.

When Macromill Embrain, a market research firm, conducted a survey in April 2019 of 1,000 people in Korea, 54.8 percent of parents with children agreed that having no-kid zones was necessary.

Yet stories about no-kid zones tend to paint a black-and-white picture, pitting parents with young children against the rest of the population.

This was especially the case regarding the recent controversy over some movie theaters offering kid-free screenings of “Frozen 2.”

When the Disney movie was released in November last year, it was popular not only among younger audiences, but also with adults, some of whom took to social media platforms after seeing the movie to complain about kids “kicking the seats” or “singing along too loudly” with the characters in the movie.

“I just had the worst experience in the theater watching ‘Frozen 2,’” one person tweeted on Jan. 3. “This kid walked around bouncing his hand on everyone’s head, threw the empty popcorn bag over the seats in front of him and put his feet up on the back of my seat. And guess what the mom did? Nothing. I can tell why some people want no-kid zones in theaters.”

Comments online calling for no-kid zones often refer to the mothers who fail to take better care of their children as “mom-roaches.” The word is slang, written as mom-choong in Korean, and was translated into mom-roach by Jamie Chang when she translated the word in Cho Nam-joo’s popular novel “Kim Ji-young, Born 1982” (2016).

Those who used “mom-choong” were called “child haters” in response in some heated online discussions about no-kid zones.

But when the Korea JoongAng Daily spoke to a number of parents with young children recently, as well as a few owners of businesses that have gone kid-free, we found the issue to be not so black-and-white. 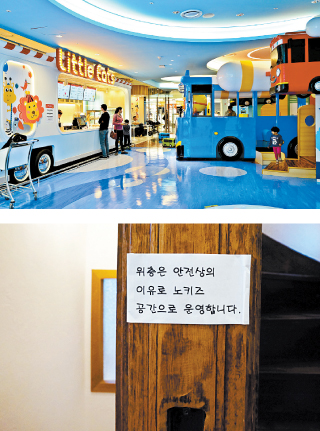 Top: A kids’ zone in Incheon International Airport. Above: A sign at The House 1932 reads, “Upstairs is a no-kid zone for children’s safety.” [NEWS 1, ESTHER CHUNG]

Everyone needs a time-out

Checking where the no-kid zones are on her phone has become a habit for Park Eun-kyung, mother of a girl turning 3 next month and a boy one year younger.

“Ever since I gave birth to my first child in February 2017, I always check before I leave home whether our destination accepts kids or not,” Park said. “And believe me, if you want to move around with kids, you have to check a lot of things at once.”

A stroller is a must for her kids, so Park checks to make sure the subway station she needs to use has an elevator; if she has to take a cab, she makes a reservation on an app because she’s tried to hail down cabs in the street and had been rejected several times because she had a stroller.

“I live in Nowon [District, northern Seoul], which is known to be a friendly neighborhood for people with young children, but you can’t be too sure,” she said. “For instance, a kid-friendly arts exhibition can exist in the same building as a no-kid cafe. So you have to search online beforehand and map out where you can go.”

It’s a lot to check everyday, in addition to taking care of her two children. But that doesn’t stop her from supporting no-kid zones.

“There is a limit to how much you can control your kids when they are at a certain age,” she said. “Sometimes all they want to do is shout at the top of their lungs and run around. So I understand if some places are kid-free. Everyone has different needs.

“I think of it as how some businesses are pet-free,” she said. “So some places want to be kid-free? I’m O.K. with that.”

Park is joined by another woman in her 30s, Cho.

“When I am not with my child, I also prefer a kid-free cafe to a kid-friendly one,” Cho said. “So I understand if some people want to be kid-free for a moment in their life.”

Cho is a mother of a 2-year-old girl. They came across a no-kid zone for the first time in October 2017, five months after her daughter was born, when they visited Cafe Soom near the Korea National Arboretum in Pocheon, Gyeonggi.

“I only found out that it was a no-kid zone when we were at the door,” she said. “We were frustrated, but what can you do? It’s not like we don’t have other options. There are plenty of kid-friendly places.” 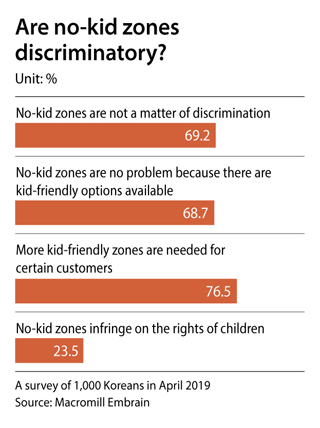 Cho and Park’s perspectives are a departure from the past.

When a cafe in the Bokjeong-dong neighborhood of Seongnam, Gyeonggi, went kid-free in August 2013, some 100 mothers in the area boycotted it en masse and reported the business to local authorities for discrimination against children.

“We’ll have more customers anyway, after people find out that we are kid-free and quiet,” Kim Chi-ho, owner of the cafe, told the Korea JoongAng Daily in June 2014.

Things turned out differently than Kim had expected.

“We lost about 100,000 won [$86] in sales every day,” he said earlier this week. “We gave up on being kid-free a year after that, but they never came back. Then the bad economy hit us and we never quite recuperated.”

Kim chose to cater to customers who prefer a quieter, kid-free environment. The strategy backfired on him, but it has worked out for others more recently.

“We turned the third floor of the cafe into a no-kid zone,” said Seong Min-je, owner of The House 1932, a cafe close to Seoul Station. “It was initially out of safety concerns for the young children, as they ran about wildly up and down the stairs. But the model has worked out - we have parents who are happy to come and stay on the first and second floors of the cafe and some other customers who want a kid-free zone and find their needs met on the third floor of the cafe.”

Seong’s cafe is a three-floor house that was originally built in 1932 and renovated into a cafe in 2018. Seong implemented the no-kid zone two months in.

In the past, kid-free areas were most frequently found in spaces that were remodeled buildings or structures.

“This is a renovated space from an old hanok [traditional Korean-style home] and we have walls that stick out and uneven ground due to the original nature of the building,” reads a notice at the counter of Yeonwoojae, a cafe in Seongbuk District. “It’s not safe for small children who tend to race from one table to another. We can’t run the cafe and take care of young children at the same time.

“So we seek your understanding in announcing this place a no-kid zone,” it said. “Again, it’s not because we hate children.”

Customers like Cho say they understand where the businesses are coming from.

“Businesses have a right to choose their customers and target a specific group of consumers,” Cho said. “No-kid cafes and restaurants are attracting customers who want that kind of a space and kid-friendly cafes and restaurants are attracting family-oriented customers - they go all out on kids’ menus, kids’ plates, high chairs for babies, toys, and even kids’ rooms that families can reserve for a more personal space to dine with their kids.”

Her view is reflected in the Embrain survey last year: 68.7 percent of 1,000 people surveyed said “no-kid zones are no problem as there are other options that are kid-friendly.”

If people are more understanding toward some people’s needs to be kid-free, can it be interpreted to mean that the society has turned more tolerant over the years?

“The fact that there is a need to divide a public space and call it a no-kid zone or call it a kid-friendly zone itself is concerning,” said Yoon In-jin, professor of sociology at Korea University. “It could be interpreted to mean that people have less tolerance for differences. Barring kids from a public space just because they are kids is clear discrimination.”

The story is different, Yoon added, if the places are barring “bad parents.”

“I heard of some of these places naming the zones ‘bad-parents zone,’ which I think is much better than barring kids based on their identity,” Yoon said. “Because you are taking a measure to punish bad behavior on the parent’s side, who must understand the norms and rules of how one should behave in a shared space better than a child.”

There is a general agreement among parents and single people alike about the responsibility of the parents to guide their children to behave in public spaces.

But the legal system says otherwise.

Injuries at restaurants and cafes have resulted in tremendous costs in compensation fees for the businesses.

The precedents in legal cases tend to encourage businesses to implement no-kid zones out of self-protection.

“The ground is uneven at our place as it is a space that was renovated from an old house,” Ingrid, a popular cafe by the sea in Jeju, wrote on its Instagram account on Sept. 7 last year, a month into its opening. “We have had no serious accidents so far involving young children, but that doesn’t promise the same in the future. For the sake of their safety, we regret to say that we are from today a no-kid zone.”

The division of kids’ zones from no-kid zones is increasingly less perceived as discrimination and more of a result of practicality, according to some statistics.

Of the 1,000 people surveyed by Embrain, only 23.5 percent said that no-kid zones infringe on the rights of a child. On the other hand, 76.5 percent said more kids’ zones should make for the needs of certain customers.

For some parents, the division is fine as long as they get to enjoy their days out without worrying about annoying other people.

“My daughter watched ‘Cinderella and the Secret Prince’ at the kid-friendly theater in the Yeongtong [Gyeonggi] Megabox,” wrote a mother surnamed Cho on her blog on portal website Naver in last February. “She had the best time ever, laughing out loud or shouting when she was surprised. And above all, we could visit the bathroom multiple times during the screening without worrying about inconveniencing others.”

“I knew we needed something different when my daughter, at the time 5 years old, ran out of the theater in the middle of the movie ‘Minions’ (2015),” wrote another mother on her blog on Naver in June 2017. “So we decided to give it a try at Yeongtong Megabox’s kids’ theater.

“What I liked most about it was that both my daughter and I were at ease when watching the movie,” she said. “At least here, you don’t have to worry about other people giving you the look for your child’s behavior.”