Food delivery titan is hungry for more after deal

Food delivery titan is hungry for more after deal 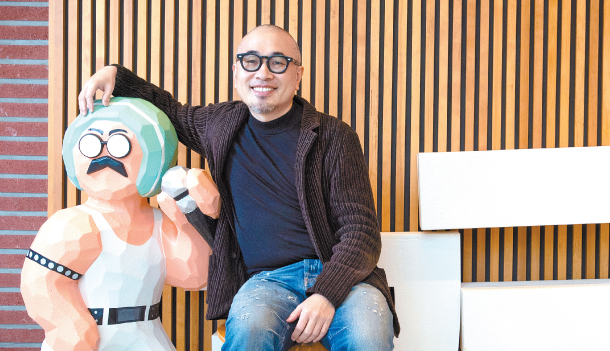 Calm after a storm was the atmosphere in the offices of Woowa Brothers, the operator of the Baedal Minjok delivery app, in Songpa District, southern Seoul. It was strangely quiet, considering its recent $4-billion deal with Berlin’s Delivery Hero. The Joongang Ilbo was there to chat with CEO Kim Bong-jin, 44, who was all alone in the office, as employees have been sent on an end-of-the year vacation. Kim shared with us his recent thoughts on the merger and where he is heading to next.

It wasn’t all fun and glory for Kim, as he spoke of bigger challenges for the future.

While Woowa Brothers was sold to Delivery Hero, Kim will actually have more to do post-transaction, as he will head Woowa DH Asia, a 50-50 joint venture, set to open in Singapore that will oversee business in 11 countries in Asia.

The German company owns 87 percent of Baemin. The remaining 13 percent, which is owned by Baemin’s top executives, will be swapped for shares in Delivery Hero. Kim will be the executive with the most shares in the parent.

“This is only the beginning,” said Kim, who added that the acquisition deal was not a mere “exit strategy.”

Q. The customers are not all sold on the recent merger deal.

A. I accept the criticism with humility. Delivery Hero was our competition, but we’ve been in contact since the start of Woowa Brothers, and while doing so, I was amazed at their global DNA. Delivery Hero sold its homegrown local food delivery operations to a Dutch company and has since focused on strengthening its global marketing. I thought over the deal, until the very end, whether I should stay resilient and fight against Delivery Hero or combine forces and enter the global market. We made the decision to take on greater challenges. I hope the public can understand that.

You could have gone public in the local market.

Who would not want to make a grand debut in Yeouido on the stock exchange? But there is a limit to the amount of capital available in the local market, either through an [initial public offering] or putting our business up for sale. We thought domestic capital was too small to compete in the global market. We ran business simulations for the next three to four years. We came to the conclusion that the merger was the right decision to continue growth. If we went public in Korea, we could show off a little at the stock market, but the company would slowly meet its death.

Weren’t you worried about losing control of the company?

To be honest, I was worried. We need to allow start-ups to have dual-class voting rights. Continuous investment is a must for start-ups because they cannot make profits right away. Sometimes the stakes between the founders and managers get mixed and founders lose control of the business along the way.

[Kim told the Joongang Ilbo, “There is a huge difference between Korea and other countries in how they assess a company’s value.” Delivery Hero’s stocks rose by around 30 percent after the deal with Baemin. In the eyes of foreign investors, according to Kim, the recent merger was considered “a smart deal made at an affordable price.”]

Why is the company valued higher abroad?

The food delivery service is in the limelight all over the world and has endless potential for growth. Investors are taking note of factors, such as the expansion of single and dual households and the emergence of new technologies, like the delivery bot and its potential to expand into the food supply market. Chinese food delivery service Meituan is valued at around 30 trillion won [$25.9 billion]. Other competitors, such as Britain’s Just Eat or Takeaway of the Netherlands, DoorDash in the United States and Uber Eats are all trying to scale up.

[There are hurdles left to overcome as the deal awaits the approval of the Fair Trade Commission. The two companies - Woowa Brothers and Delivery Hero, which operates Yogiyo and Baedaltong - have more than 90 percent of the market. There are heightened concerns from relevant parties over the possible monopoly that could lead to higher commissions for small business owners and reduced benefits for consumers.]

The company promised not to raise commission fees and advertisement fees, but concerns still remain.

The common reason why companies partner up through merger and acquisitions is to reduce fixed expenses. In a fast growing market, it’s better to keep each other’s competitive edge intact and nurture them individually. We will die together in a business structure that tries to increase profit by reducing fixed expenses. I drew a line between us and Yogiyo and Baedaltong in terms of company management.”

[After the merger, Kim became one of the three members of the company’s global advisory committee, and he emphasized his authority to make independent decisions.

“Yogiyo and Baedaltong are directly managed by the Delivery Hero headquarters, while Baedal Minjok is managed by the Asia office in Singapore, where I will be in charge. I will prevent any decisions from the top that may hurt our unique competitiveness,” said Kim. “It’s about finding the balance between freedom and discipline.”

Another strength Kim used to grow the company was its unique corporate culture. It is characterized by being “carefree” and “lively” with a somewhat “kitsch” aspect that became a brand of its own. Hong Sung-tai, a business professor of Hanyang University, called it “Baemin-esque.” Employees start work at noon every Monday.

There are no individual performance reviews. The CEO and employees hold a “woo soo ta,” or “Woowa chat time,” where everyone in the office gets together, complains and comes up with solutions.

Its “Baemin-esque” style was embedded in every little detail of Woowa Brothers’ office.

Walls are plastered with posters reading “HUL,” a Korean slang equivalent to the English expression “OMG.” The pen we received as gifts from Kim read “OMG, I am a fan too!” Pen and fan are homonyms in Korean. The B-movie aesthetic inside the office helped create Baemin’s infamous witty and eye-catching advertisements. It may have been challenging for a company with more than 1,400 employees to maintain such culture.]

I think some of the employees may feel uncomfortable.

An organization’s culture is not about finding the common ground. What builds our culture is the unique philosophy and point of view of our company. I am sure there are some who would disagree. Doesn’t the word “culture” come from the verb “cultivate”? The idea of “culture” is artificial by nature. When people who resonate with our uniqueness get together, they have fun at work, make progress and offer good services to the customers. That’s culture.

What an unexpected answer. Didn’t you always emphasize creativity?

No. I emphasize balance. The balance between a horizontal organization and vertical decision-making, the left brain and the right brain, business decisions that are based on statistics but emphasize emotions. Local companies assume our corporate culture offers a lot of freedom. But, employees who first start work here are surprised. Is a completely horizontal organization desirable? I’m not sure.

[In every nook and cranny, the employee guidelines could be found: “11 ways to work better in Songpa.”

All and all, the rules seemed to be focused more on discipline than freedom. Kim wants to place his company somewhere in between.

“Balance is not keeping a perfect five between zero and 10, but flexibility,” Kim told the Joongang Ilbo.

He finished our conversation with his favorite quote by Professor Gary Hamel of the London Business School. “Sometimes we work like honey bees, but sometimes we must work like a guerrilla.”

This year marks the 10th anniversary of Woowa. What started off with food flyers on the streets of the Gangnam area in southern Seoul is now a $4-billion business.

There were times when Kim couldn’t generate enough revenue to pay employee wages, but after all the struggles, the company is now a unicorn legend.

Kim is still hungry for more. This may be why he is obsessed with big capital.

“I do not want to follow the footsteps of a fellow CEO whose internet company slowly faded away, busy trying to defend himself in the local market,” says Kim.]