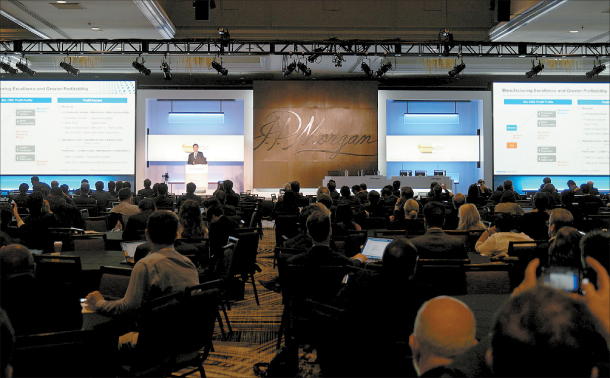 With tech heads still spinning from CES 2020 last week, local bio hotshots are headed for their own showdown in the United States.

More than a dozen Korean companies are attending the J.P. Morgan Healthcare Conference in San Francisco, often referred to as the bio shopping mall for Wall Street investors.

At the 38th annual event, which is being held at the Westin St. Francis San Francisco hotel, 1,500 companies from 50 countries are rolling into town to pitch their latest, while investors will be there to find places to put their capital to work. The conference is where deals are signed, pharmaceuticals bought and mergers discussed.

It is likely to set the tone for 2020, a year of huge challenges and opportunities globally.

It is especially important for Korean companies, as they faced a series of setbacks last year and are scrambling for a turnaround.

About 500 companies will be making 30-minute presentations at the conference.


Two on the big stage

Two of the companies from Korea will be taking the main stage in the Grand Ballroom, which can accommodate about 800 people. They are Celltrion and Samsung BioLogics.

Some in Korea are seeing this as a sign of recognition. The big leagues.

Samsung BioLogics CEO Kim Tae-han and Executive Vice President John Rim are expected to discuss its progress as a contract development and manufacturing organization and detail its mid- and long-term plan to become an end-to-end solution provider for the global biopharmaceutical industry by utilizing its large contract production capacity.

Discussion of its new bio manufacturing plant is likely to anchor its presentation. Up and running since October 2018, it is the largest of its kind in the world and, equipped with “N-1 Perfusion” technology since July last year, can produce medicines 30 percent faster.

While many companies are using the technology in small-size operations, Samsung Biologics is the only one, or one of the few, using it for large-scale production.

This is the company’s second consecutive year on the big stage.

Celltrion’s founder and Chairman Seo Jung-jin may personally give the company’s presentation in the Grand Ballroom, detailing growth strategies centered on new drugs and biosimilars. A spokesperson for the company said Celltrion plans to offer an update on the further rollout its Remsima SC biosimilar. The biosimilar won sales approval from the European Medicines Agency in November.


Five others, off Broadway

While the remaining Korean companies will not play to such large audiences, five local players will be presenting in the Emerging Markets Track and are still very much focused on scoring a win at the conference and advancing their goals of targeting the global market.

Daewoong Pharmaceutical, coming to town with its CEO and major research and development (R&D) and global sales executives, will be talking about its R&D progress and plans to develop autoimmune disease treatments.

The company previously announced it is establishing a joint venture with Britain’s Avacta to co-develop autoimmune disease treatments.

The company plans to share the global market strategy for its Nabota botulinum toxin product, which has so far earned sales approvals in 50 countries, including the United States, Canada and countries in Europe.

It is also sharing its R&D progress on autoimmune disease treatment DWP212525 and fibrosis medicine DWN12088.

Genexine, a Korean biotech firm, will have Chairman Sung Young-chul share midterm results of a Phase 2 clinical trial of its HPV therapeutic DNA vaccine in combination with Keytruda targeting the treatment of HPV-induced cervical cancer.

Hanmi Pharmaceuticals - a company focused on developing treatments for cancers, metabolic diseases, rare diseases and autoimmune diseases - will update the conference on progress on 30 treatment candidates in four target areas.

The company is especially focused on highlighting its oral anticancer drug Oraxol and neutropenia treatment Rolontis, both of which are awaiting approval from the U.S. Food and Drug Administration.

Hugel, which has botulinum toxins and hyaluronic acid fillers, will use its time slot to detail its blueprint for becoming a leader in the global medical esthetics market.


Still important for others

Despite not being slated to speak before investors, other Korean biopharmaceutical companies see the conference as a good place for meet and greets.

ABL Bio, which will be attending the annual conference for the fourth time since 2017, said it has already arranged more than 30 partnering meetings based on some of its treatments under development.

Elevar Therapeutics, the U.S. subsidiary of HLB known for developing rivoceranib, a small-molecule angiogenesis inhibitor in gastric cancer, also said it has some business meetings lined up during the conference.