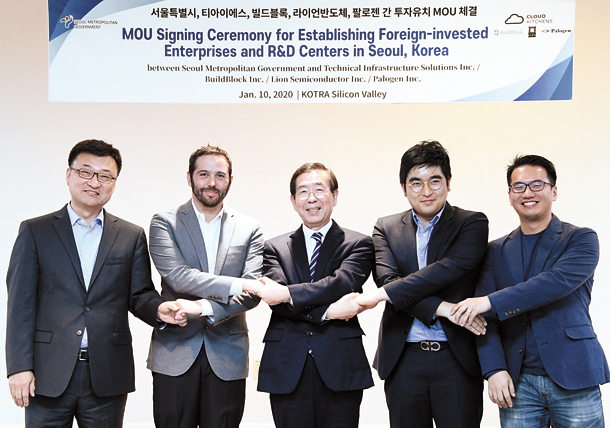 Seoul city attracted a total of $330 million worth of investment from a group of California?based firms and start-ups during Mayor Park Won-soon’s trip to the United States last week as the local government works to create partnerships for innovation.

Of the $330 million, $200 million came from TIS, a Los Angeles-based cloud kitchen operator led by Diego Berdakin. The goal is the establishment of shared kitchen spaces in the capital.

TIS plans to create 54 cloud kitchens designed to function as production units for food delivery services over five years and hire 417 employees in that timeframe, according to a statement released by the Seoul Metropolitan Government.

In addition to the provision of physical space, the project will also offer data-driven consulting services for the restaurant clients.

In speaking about the rationale for the investment, Berdakin cited the capital city’s dense population, high income level and enthusiasm for food delivery. He said these could help sustain a cloud kitchen business.

Other investors include BuildBlock, a real-estate platform based in San Jose, California, and Seoul.

Under the agreement, the company will invest $100 million into building a research and development (R&D) center in Seoul and plans to recruit 50 people.

San Francisco-based Lion Semiconductor will invest $100 million in setting up an R&D center and hire 37 employees.

Seoul will also host a research center for Palogen, a biotech company based in Seoul and Palo Alto, California. The start-up makes a $100 million investment and explore ways to diagnose cancer using body fluids.

Seoul city also said that other investment firms, including Northern Light Venture Capital, GroveStreet and Horsley Bridge Partners, “expressed their interest” in investing at least $100 million in the city during a meeting with the mayor on Friday.

The mayor pitched Seoul’s competitiveness as a destination for start-up research and operation during the meeting and a separate event hosted by the Plug and Play Tech Center, a California-based accelerator.

“In order to become a city of start-ups, we have pursued six different initiatives, such as fostering talented young individuals specializing in cutting-edge technologies, creating working spaces for start-ups, and providing step-by-step support and funding to start-ups as well,” Park said during the event held at the headquarters of the start-up accelerator.

He added that the start-ups supported by the Seoul government have attracted foreign investment totaling 140 billion won ($121 million).

For the new year, the mayor said that the city will be on the lookout for investments and projects in cooperation with the start-up players.

“This year, we will continue to be committed to expanding investments for new industries that will drive the economy in the future, and particularly focus on developing clusters for emerging industries such as the AI and biomedical fields,” the mayor said.

He also vowed to be “always in close contact and cooperation with the Korean Ministry of Trade, Industry and Energy and Kotra” to better engage with such initiatives.