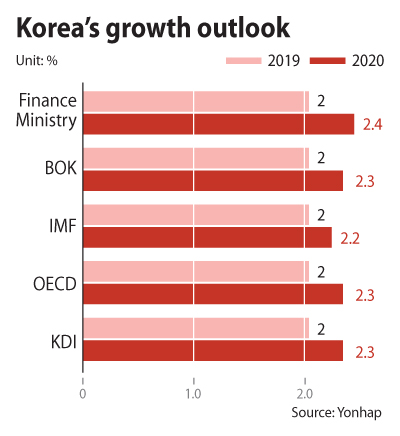 Korea’s central bank will likely hold its policy rate steady for the time being as signs of a recovery in the global semiconductor market suggest a possible end to the steady decline in exports that have kept the local economy growing at the slowest rate in a decade, analysts said Monday.

The Bank of Korea (BOK) will hold the first of its rate-setting meeting of the year on Friday.

Gov. Lee Ju-yeol stresses the need to maintain support for the local economy, and analysts expect the board not to do so by again slashing the policy rate this week.

The seven-member board reduced the base rate by a quarter percentage point in July and again in October, sending the key rate to a joint all-time low of 1.25 percent.

Kim was one of 19 analysts recently polled by Yonhap Infomax, the financial news arm of Yonhap News Agency, in which all 19 anticipated the bank’s board would keep the rate steady this week.

“We expect the central bank to keep the rate steady for some time while monitoring the effects of its easing stance and the low base effect on removing uncertainties,” Hi Investment & Securities analyst Kim Sang-hoon said.

The outlook for the rate freeze comes on the heels of signs of a possible recovery in global demands and prices for chips, Korea’s single largest export item, accounting for nearly one quarter of its overall exports.

Korea’s exports have dipped for 13 consecutive months since December 2018. The steady decline has been partly attributed to weak chip prices that kept the overall value of its outbound shipments shrinking despite an increase in their physical volume.

Some believe the recovery in the semiconductor market alone may not be enough to keep the bank from again slashing the base rate further down the road.

“It is true the Korean economy and consumer prices are moving toward improvements on a low base, but the central bank may see the need to additionally cut the key rate at least once, should the economy grow only in the low 2 percent range and consumer prices at around 1 percent [as anticipated],” Meritz Securities analyst Yoon Yeo-sam said.

The BOK earlier predicted the local economy to expand 2.3 percent this year, recovering from last year’s estimated 2 percent on-year expansion, the slowest since 2009 when Asia’s fourth-largest economy grew 0.7 percent from a year earlier.

Some forecast that the central bank may be forced to keep the base rate steady at the rock-bottom level throughout the year if not move in the other direction to close its interest rate gap with that of the world’s largest economy, the United States.

“The BOK will likely maintain its easing stance since the recovery momentum continues to remain weak, but its limited space for policy maneuvers appears to be a limiting factor that may force it to keep the rate frozen,” Shin Dong-soo, an analyst at Eugene Investment & Securities, said.

The U.S. base rate sits in a range of 1.75 percent to 2.0 percent, far higher than Korea’s 1.25 percent, driving capital outflow from Korea.

Following the central bank’s first rate reduction in more than three years since in July, foreign investors net sold Korean stocks for four consecutive months between August and November, dumping a total of $5.16 billion during that period.

The central bank chief has repeatedly underscored the importance of financial stability for small, emerging economies such as Korea.

He has also stressed the need for the central bank to expand the room for monetary policy maneuvers, by raising its base interest rate whenever it can.

“The so-called room for policy is very important, and the central bank, that must move first when a recession hits, must reserve necessary policy measures,” the central banker said on Oct. 20.

“There was criticism when [the central bank] raised the interest rate twice, and I wonder what might have happened if it had not then,” he said in October.