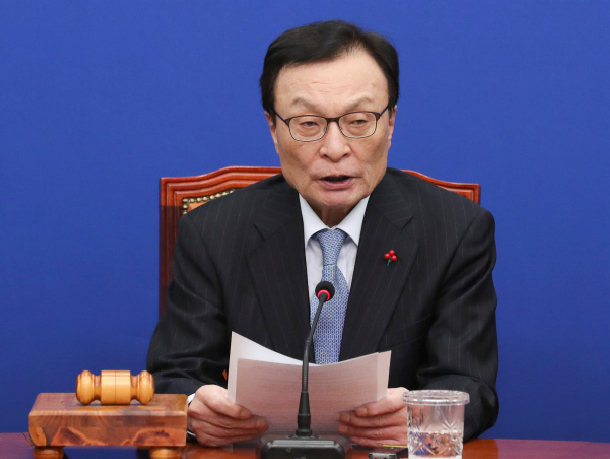 Ruling Democratic Party Chairman Lee Hae-chan on Monday says that the Korean economy has hit the bottom, but the public can’t feel a rebound as its recovery speed is very slow. [LIM HYUN-DONG]

“Keeping someone on the hook” is an expression used to describe the behavior of not making a commitment but still keeping the person within reach. You give bait and maintain the relationship without commitment. The essence of keeping someone on the hook is an ambiguous attitude, leaving some room for misunderstanding and not allowing the other person to give up. It can also be called “torture by hope,” the title of an essay by singer Park Jin-young in his 1999 book “Sorry.” Torture by hope is to show an ambiguous attitude and give hope, making the other person suffer but unable to give up.

The origin of torture by hope is the 1883 novel “A Torture by Hope” by Villiers de l’Isle-Adam. A Jewish rabbi who was being tortured in an underground prison for a charge of usury when an inquisitor came to him before the day of execution. The inquisitor unchains him so he can spend his last night comfortably, and the prisoner finds that the door is left unlocked. He escapes from the prison only to be faced with the inquisitor. It is the last torture in the name of hope.

Torture of hope related to the Korean economy is ongoing. At the ruling Democratic Party’s high-level party-government meeting, Chairman Lee Hae-chan said that the economy has hit bottom, and because it is recovering slowly, the public cannot feel the improvement. Vice Prime Minister for Economic Affairs Hong Nam-ki said at a cabinet members’ workshop on Jan. 11 that this year should be a year of economic recovery.

The rosy slogan of income-led growth provided the torture of hope over the past two years, but not many results were made. The baton of the torture of hope has been passed on to the theory that the economy has already hit bottom and is ready to go up. In October 2019, the Organisation for Economic Cooperation and Development (OECD)’s composite leading indicator rebounded after 22 months, sparking the flame of hope. Nevertheless, the Korea Development Institute diagnosed that the Korean economy was “sluggish” for 10 consecutive months. The cyclical component of coincident composite index, which shows the current economic state, is edging along.

With the general election slated for April 15, keeping the public sentiment on the hook is in full force, with the theory that the economy will improve. However, some are concerned about a possible double dip or L-shaped economy of hitting bottom and not recovering. It hurts even when you are hit with a flower. Hitting with hope is still torture. Torture leaves serious trauma on people and the economy.