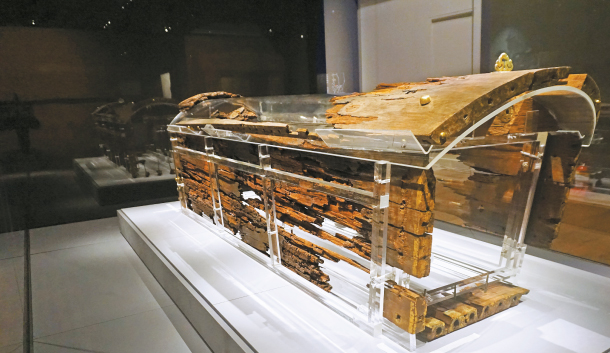 A wooden coffin discovered in 1917 in a tomb in Iksan is likely to be that of King Mu of Baekje Kingdom. [IKSAN NATIONAL MUSEUM]

IKSAN, North Jeolla - Iksan National Museum opened its doors on Friday, with more than 23,000 relics found at the site of the Mireuk Temple in the North Jeolla city, the largest Buddhist sanctuary of the Baekje Kingdom (18 B.C. - A.D. 660), some of which were on display to the public for the first time.

“Shown at the museum for the first time today are the gold thread embroidery that is estimated to have wrapped the sarira reliquaries found in the pagoda at Mireuk Temple site, a terracotta head of a monk and a wooden coffin [that is presumed to have held King Mu],” said Bae Ki-dong, director-general of National Museum of Korea, the mother museum of the Iksan museum, on Friday.

The museum holds three main halls for exhibitions: the first holding relics from the site of the royal palace of King Mu (580-641) of the Baekje Dynasty; a second holding sarira reliquaries and other objects found specifically on the Mireuk Temple site; and a third showcasing jars and pottery, gilt-bronze decorated shoes and crowns whose elements and designs serve as evidence of the intercultural activities of the Baekje Kingdom.

The museum has existed since 1997 in the form of a small exhibition center. It was upgraded to a national center in 2015 after Unesco designated Iksan one of the eight historic sites of the Baekje Kingdom era, alongside Gongju and Buyeo County in South Chungcheong.

The museum is located on the premises of Mireuk Temple, where Korea’s oldest and largest existing stone pagoda reopened to the public last year.

It is open from 9 a.m. to 6 p.m. every day except for Mondays and holidays. 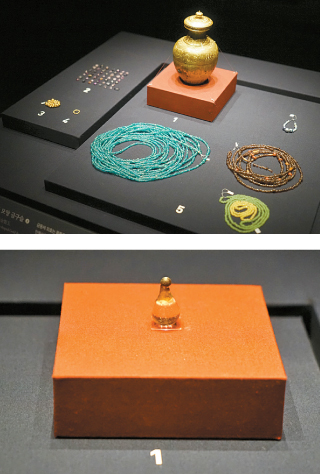 Top: Reliquaries of the western stone pagoda at Mireuk Temple in Iksan, North Jeolla. Above: Tip of the innermost glass jar of the reliquaries. [IKSAN NATIONAL MUSEUM]

One of the highlights of the museum, according to several curators, is the wooden coffin that is presumed to have been that of King Mu’s.

“The coffin, first discovered in 1917, is being exhibited in its complete form for the first time in 103 years,” said curator Lee Yeong-beom. “It’s not 100 percent confirmed who it was made for. Given that the wood used for the coffin is a type of Sciadopitys verticillata, a very expensive tree at the time, some experts think that this could have been the coffin made for King Mu.”

The tomb from which the coffin comes from is located about 2 miles from the museum. It is presumed to be the final resting place of King Mu, according to records such as Goryeosa (the records of Goryeo Dynasty from 918 to 1392).

But in 2009, while the renovation of the pagoda on the Mireuk Temple site in Iksan was ongoing, archeologists stumbled upon the sarira reliquaries. With the reliquaries, they found a gold plate with an inscription of sarira enshrinement that said that the person who ordered the pagoda to be built in 639 was the wife of King Mu named Queen Sataek - contrary to the belief until then that Princess Seonhwa was the wife of King Mu.

The controversial revelation led Jeonju National Museum, which held the coffin from 2014 to 2019, to reopen documents and records preserved during the Japanese colonial period (1910-1945) regarding the tomb in 2017, in commemoration of the 100th anniversary of the discovery of the tomb.

The Japanese analysis on some teeth found in the tomb said the tomb owner may have been a woman in her 20s to 40s. This further confused the scholars in regards to who the owner of the tomb was.

The museum reopened the tomb in 2017. That was when they discovered a wooden box containing 102 pieces of bones.

“The tests on the bone pieces showed that they belonged to a man in his 50s to 60s, who probably died between 620 and 659,” Iksan National Museum says in its museum catalogue published on Thursday. “This result led the experts to conclude tentatively again that the owner of the tomb was probably King Mu, given the years coinciding with his reign and his age at the time of his death.”

The coffin’s pieces were put together around a transparent box so as to show what it would have looked like in its full form.

Gold thread embroidery, top, and a terracotta head of a monk, above, are objects from Baekje displayed to the public for the first time. [IKSAN NATIONAL MUSEUM]

The pagoda at the Mireuk Temple site was a sensation last year when it was finally unveiled after 18 years of renovation work. The six-tiered granite tower is National Treasure No. 11 and one of the most symbolic remains from the Baekje Kingdom.

Built during the heyday of the ancient kingdom during the reign of King Mu, the pagoda was one of the three towers, including a presumed wooden pagoda in the center, dotting the temple, the biggest Buddhist sanctuary at that time.

The pagoda, believed to have originally been nine-tiered, lost its top three layers around the 16th century during the Joseon Dynasty (1392-1910), which eschewed Buddhism in favor of Confucianism. In 1915, while the Korean Peninsula was under the colonial control of Japan, the tottering pagoda was bolstered with cement in a makeshift restoration work.

But the concrete work propping up the pagoda was diagnosed “structurally unstable” in a safety test in 1998, and the state-run Cultural Properties Committee made a decision the next year to dismantle and reassemble the historic structure before the repair work finally began in 2001.

The work was completed by the end of 2019, but not before it led to more discoveries, including the sarira reliquaries found in the pagoda in 2009.

Some of the sarira reliquaries that were found in the pagoda are on display at the museum, but not for long.

The state of the tip of the jar is unstable, another curator said, and it will likely go into the preservation room soon. 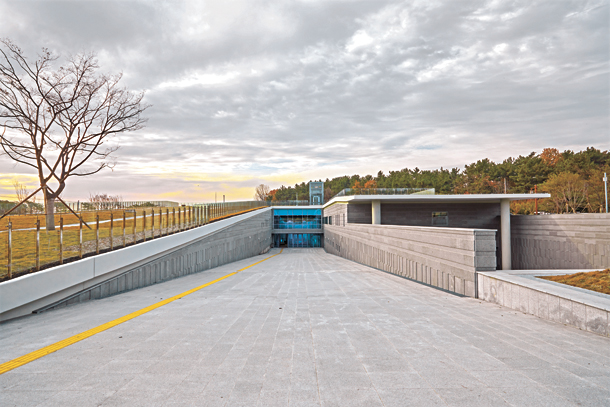 The newly-built Iksan National Museum located on the premises of the Mireuk Temple site in North Jeolla is open every day except Mondays and holidays. [IKSAN NATIONAL MUSEUM]

In the special exhibition room, open only until March 29, there are 15 sarira reliquaries found in pagodas from all over the country, including several national treasures.

The explanatory notes next to the objects provided by the museum asks questions such as “Can you spot the three-legged crow on the decoration of the Buddha?” to educate visitors on the details found in the intricate designs of the reliquaries.

None of the explanatory notes in the special exhibition room, however, are in English.

“We apologize for that,” said a curator of the museum. “We’ll be working on addressing this issue.”

In a Buddhist tradition derived from India, ancient Koreans placed a group of caskets, containing what is alleged to be Buddha’s sarira plus some other precious articles, in the middle of the pagoda. That’s why in early Korean Buddhism, the pagodas were located in the center of the temple, although in later years, a hall containing a stature of Buddha became the center.