When money turns regular people into savages: ‘Beasts Clawing at Straws’ stars a veteran cast doing whatever it takes to win

When money turns regular people into savages: ‘Beasts Clawing at Straws’ stars a veteran cast doing whatever it takes to win 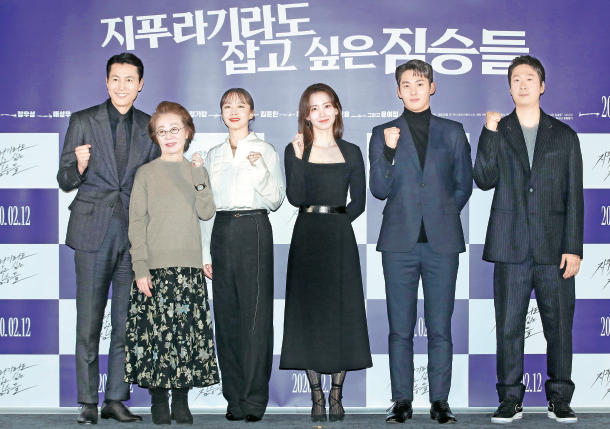 From left, the cast of the film “Beasts Clawing at Straws,” including actors Jung Woo-sung, Yoon Yeo-jeong, Jeon Do-yeon, Shin Hyun-been and Jung Ga-ram and director Kim Yong-hoon, at a press conference to promote the film at the Seongsu branch of Megabox, eastern Seoul, on Monday. [YONHAP]

After a month of animal-friendly films in local theaters, February will bring the film “Beasts Clawing at Straws,” a breathtaking crime thriller that promises to take audiences on a dark and suspenseful adventure about humans who turn into savages that are willing to do anything to get their hands on cash.

“For a while, there were many films that asked socially meaningful questions to viewers, but this film is more about highlighting how desperate or needy a person can become in front of their materialistic desires,” actor Jung Woo-sung said at a press conference held on Monday.

Jung portrays Tae-young, a Korea Customs Service worker who finds himself in hot water when his ex-girlfriend, Yeon-hee, leaves him to deal with loan sharks to pay back an overwhelming pile of debt. Yeon-hee, played by Jeon Do-yeon, is a pub manager who wants to erase her past altogether through getting her hands on a bag full of cash, which is more than enough to turn her life around.

Along with other six main characters, played by veteran actors Yoon Yeo-jeong, Bae Seong-woo, Jeong Man-sik, Jin Kyung, Shin Hyun-been and newbie Jung Ga-ram, the film is described as “a relay race between eight characters passing the baton to tell their respective stories of the reason why they want to acquire the money so badly,” according to director Kim Yong-hoon.

The thriller is director Kim’s debut feature film. For being his first go at a major film, the director couldn’t believe his luck while working with a set of legendary film stars.

“If I compare it to baseball, it’s like having an All-Star roster for my first game,” the director said. “It was definitely a large load to carry.”

The film is adapted from a Japanese novel of the same title by Keisuke Sone, and Kim hinted that the most notable difference between the film and the novel is the story’s ending.

“What I was concerned about most was how to change the distinctive story structure that could only exist in a novel,” Kim said. “So I needed to redevelop [the story] into a cinematic structure. As for the characters, because I wanted to expose how money can turn even the most mundane people into something else, I changed Tae-young’s job from a police detective to a government worker.”

To explain his character in one word, Jung phrased Tae-young as “dingy.”

“Tae-young thinks he is one step ahead of everyone else, but that’s his side of the road,” Jung said. “Actually he is sloppy, someone who can’t really commit a crime. But when he sets his eyes on [the money] he mistakenly believes that he can elaborately control everything and execute the perfect revenge [against Yeon-hee] with him coming out on top.”

Jeon, on the other hand, took care to portray the two-sided nature of Yeon-hee.

“There’s the lovely side that Tae-young knows, and there’s a hidden side that he doesn’t know,” said Jeon. “Yeon-hee is already tough, so I tried to loosen myself up while playing her.”

Despite Jeon having acted for 31 years and Jung for 27 years, this film is the first time the two actors have worked on the same set.

“We [Tae-young and Yeon-hee] were supposed to be involved in a long-term relationship, very familiar with each other, so that took a while to adjust to,” Jeon said. “But just as when I was getting comfortable, the shooting was over. So I hope we can have another chance to work together.”

Although the director had the chance to work with a cast of exceptionally talented actors, he singled out Jung’s character, Jin-tae, as one of the distinguishable points in the film.

“Jin-tae is an illegal immigrant from China, and usually in other local films [ethnic Koreans from China] are shown to have a very strong dialect [that often draws admiration or laughs from the audience],” said the director. “But Jin-tae is different. In front of a girl he likes, he doesn’t want to use his accent and tries to speak as normally as possible, which can be an even tougher thing for an actor to portray.

“But after two to three months of practicing with the dialect teacher, Jung managed to pull it off, and it was a moment where I could see through how much passion and effort [Jung] put into his role.”

“It’s definitely eventful,” Jung added. “There are multiple sides of humanity that are coming out in the film. Audiences will be able to enjoy the film even more if they follow how each character chases after their desires from that character’s perspective.”

The film is slated for release on Feb. 12.