A week after losing An Chi-hong to the Lotte Giants, the Kia Tigers made sure their other free agent wouldn’t face the same fate and announced the signing of infielder Kim Sun-bin on Tuesday. 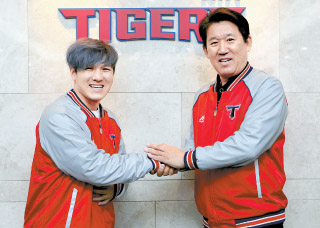 “I’m glad to be able to continue my career with the Kia Tigers, and I’m thankful to the club for recognizing me,” said Kim through a Tigers’ press release. “I’ll fulfill my role by being the first one to act so our team can develop one step further.”

He had his best season in 2017, when the Tigers won both the regular season and the Korean Series. Throughout the 2017 season, Kim had a career-high 0.370 batting average with five home runs, 64 RBIs and 176 hits.

Over his 11 seasons with the Tigers, he’s experienced two Korean Series victories as well as two regular season wins.

The Tigers were disappointed by a seventh place finish last season with 62 wins, two draws and 80 losses. As they’ve been advancing to the postseason for three straight seasons, from 2016, 2017 and 2018, last season was also a huge letdown for the fans.

After the 2019 season ended, two of the Tigers star players became free agents and the club angered fans by losing An last week to the Giants.

They’ve chosen the Giants’ right-handed pitcher Kim Hyun-soo. Kim was a rookie last season, appearing in only six games. While tossing six and one-third of an inning for the Giants over six games, he picked up one loss with a 1.42 ERA.

The Eagles said Yoon agreed to a one-year contract, with an option of another year, at a maximum of 500 million won.