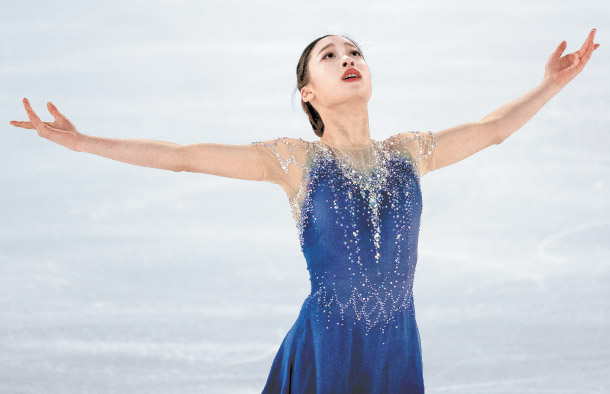 You Young performs her free skate program during the figure skating women’s singles at the 2020 Winter Youth Olympics in Lausanne, Switzerland on Monday. [REUTERS/YONHAP]

“I was honestly kind of nervous before my skate,” You was quoted as saying on the Olympic website. “But I tried to keep thinking that this is just a practice, not a competition, and I think that helped me.”

“I’m happy with my triple axel, but I didn’t have a chance to put my triple toe in the second half,” You was quoted as saying. “Instead of a double axel-triple toe, I just did a double axel-double toe, but I think it’s a good way to be mistake-free.”

Although You had been on a tough schedule where she had to make her way to Lausanne, Switzerland, right after the national championship, which ended on Jan. 5, she wasn’t complaining.

“I think I did pretty good here even without getting to rest,” You was quoted as saying. “I’m happy with the result today and I’m very thankful that my fans keep watching me and cheering me on.”

For You, Kim Yun-a was the reason she started figure skating. She was living in Singapore in 2010 when she saw Kim win the gold medal at the Vancouver Winter Olympics.

Until 2012, You trained by herself in Singapore, but the tropical climate made conditions less than ideal. She had to practice in public rinks and taught herself techniques by watching videos of Mao Asada and Kim because there were no professional figure skating coaches in Singapore. To improve, You’s mother brought her to Korea in 2013.

“My plan is to land a quad in Beijing if I can,” You was quoted as saying. “And I want to do a clean program there.”