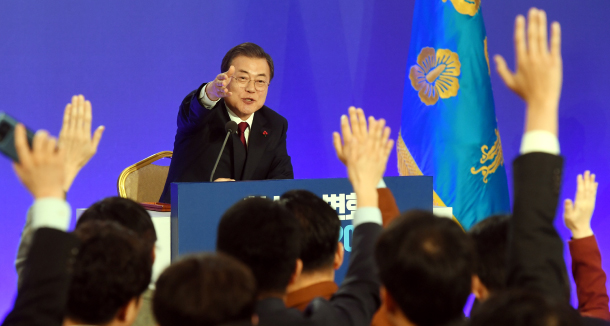 He also emphasized his optimism in an economy growing at its slowest pace in a decade.

“[The government] will endlessly release more powerful measures [to cool off the real estate market] if the current measures’ effect is thought to have worn off,” Moon said during the press conference held at the Blue House. “I am once again telling you that the government is determined to crack down on real estate speculation and stabilize real estate prices.”

In a televised New Year’s address on Jan. 10, Moon said his administration will “never lose in the war against real estate speculation.

The president said his goal was not merely to prevent housing prices from going up.

“Prices in some parts of the country have surged to levels that feel threatening and unacceptable to the lower-income class,” Moon said. “We need to bring down the price before the hike.”

On Dec. 16, the government surprised the market by announcing its 18th measure to crack down on overheated real estate prices, clearly targeting high-priced apartments in areas of southern Seoul and people who own more than one apartment.

No mortgages were permitted for purchases of residences valued at over 1.5 billion won ($1.3 million), and the loan-to-value ratio for mortgages on apartments costing 900 million won or more was drastically lowered in areas designated speculative or overheated, all in Seoul. Apartments valued 1.5 billion won or more accounted for 15.5 percent of all apartments in Seoul with a strong concentration in southern Seoul. In Gangnam District alone, 70 percent of apartments have values exceeding 1.5 billion won. In neighboring Seocho District, the figure is 66 percent, and in Songpa District it’s 48.4 percent.

However, there are reports that real estate prices in other areas near Seoul, such as in Gyeonggi’s Suji and Dongtan districts, have been rising.

The government has been warning about a so-called balloon effect, where a crackdown on some regions results in other areas’ prices rising.

“Because the last time the focus was on multiple homeowners and high-end apartments valued 900 million won or more, there are possibilities of a balloon effect where housing units valued below 900 million won see their prices rise or jeonse [long-term rent] prices rising,” Moon said Tuesday. “[The government] will continue to monitor the situation closely and will come up with reinforced measures,” he added. “Once a real estate measure is set up, one can’t say its effect will last for a long time.”

“Although economic growth when compared to previous years is much lower, when looking at world growth, Korea ranks second after the United States among the ‘30-50 club,’” Moon said referring to countries with per capita gross national income exceeding $30,000 and populations of more than 50 million.

“Despite the difficulties, [Korea] has overcome,” Moon said.

He said Korea’s economy in 2019 was believed to have grown 2 percent. If so, this would be the slowest economic expansion since 2009 when the economy only grew 0.8 percent in the wake of the global economic meltdown.

“It is a consensus among economic research institutes’ analyses including international economic organizations and Korean institutions that the new year’s economic growth will be higher than that of 2 percent,” he added. “In fact, there are signs that exports are improving since December.”

Moon also cited a recent Korea Customs Service report saying that exports in the first 10 days of this month increased 5.4 percent compared to a year ago.

Moon has been emphasizing a recovery in exports, banking on a recent improvement in global demand for semiconductors, which account for 17.3 percent of all exported goods.

“During [my] New Year’s addresses, I’ve talked about our economic situation,” Moon said Tuesday. “When I talked about the small positives in the economy, there were criticisms [that I] didn’t know much about people’s economic difficulties and had a very easygoing approach to the issue.

“However, as you know, our economy has always had mixed indices both negative and positive.”

Moon said he emphasized the positive because it was a New Year’s address.

“All I have said [in the New Year’s address] was true,” Moon said. “I may have not mentioned the negative indices, but at least the things that I have said were all true.”

Moon also talked about a much-publicized conflict between the government and the ride-hailing service Tada. Moon stressed the need to create social consensus on this issue.

“[We] have yet to solve many problems created in the social scene between existing and new industries,” Moon said. “There’s a need to create a social consensus for each and every case.”

He said the government will work on allowing innovative companies like Tada to launch while guaranteeing the profits of existing taxi drivers.

The taxi industry since 2018 has repeatedly protested the launch of technology companies’ taxi services.

The government unexpectedly turned against the service by revising the Passenger Transport Service Act to effectively ban Tada.

The Moon administration has claimed to be a champion of innovative growth.

“The government has actually made more achievements in speeding up regulatory innovation than any other country in the world including regulatory sandboxes and regulation-free zones,” Moon said.