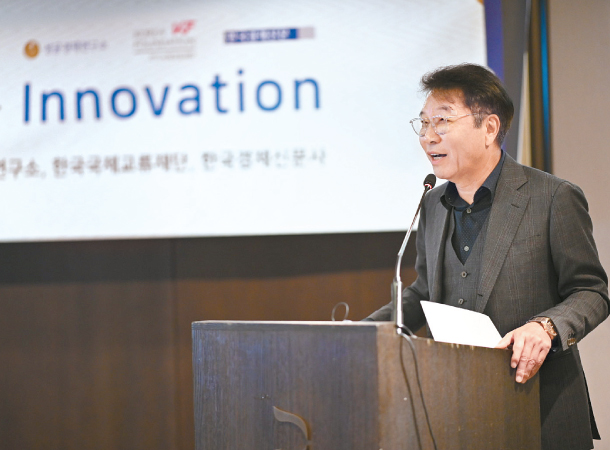 Lee Soo-man, head and founder of SM Entertainment, speaks on Tuesday at The Plaza Hotel in central Seoul, as a part of the “K-pop and Innovation” seminar, hosted by the Success Economy Institute, the Korea Foundation and The Korea Economic Daily. [KOREA FOUNDATION]

There will be a day when people will walk around with their very own artificial intelligence (AI) avatars that look like their favorite stars, and K-pop will lead the way, Lee Soo-man, founder of SM Entertainment, said on Tuesday at the “K-pop and Innovation” seminar held at The Plaza Hotel, central Seoul.

Co-hosted by the Success Economy Institute, the Korea Foundation (KF) and The Korea Economic Daily, the seminar featured Lee, Professor Lee Jang-woo of the business department at Kyungpook National University and Lee Geun, president of the Korea Foundation, who each spoke on the role of K-pop as more than just entertainment, but as the key to keep Korea globally competitive in the future. U.S. Ambassador to Seoul Harry Harris and Kim Gi-woong, CEO of The Korea Economic Daily, were also present.

“I began my business in entertainment with these questions in my head,” Lee of SM said, kicking off his speech titled “Culture Universe and Future of K-pop.”

“Why weren’t our singers famous abroad? Why didn’t people know them? Shouldn’t we be trying something? I said to my staff in 1997, that it’s only a dream if you dream of it alone. It’s the beginning of the future if we dream together.”

According to Lee, K-pop’s advancement into the global market - as proved by the feats achieved by bands like BTS and SuperM on the international music charts - was not the result of just good music, but of delicate engineering and detailed formulas set by himself and other producers in the industry.

Through what he dubbed “culture technology,” Korean producers cast, trained, managed and marketed their stars that ultimately changed K-pop as a whole and led to the scene that we see now.

“My goal is to create a culture universe, where the culture technology builds a world full of entertainment. It’s a world of celebrities, where human-like AIs will be [with us as we live our lives.] They will wake me up in the morning, they will give me the information that I need, join me in my community and become my assistant. There will come a day like this, and I believe that it will come within the next 10 years,” Lee said.

He added, “Just as people immediately think of the Swiss when they hear ‘watch,’ I hope K-pop brings people closer to Korea.”

President Lee of the Korea Foundation spoke about “K-pop and International Exchange,” followed by Prof. Lee whose presentation was titled “K-pop Innovation: The Second Innovation in the Korean Economy.”