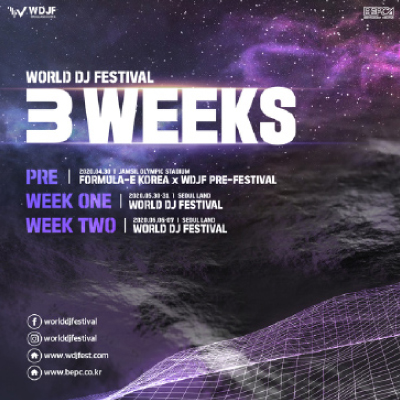 The World DJ Festival will be held three times this year, from the end of April to early June.

The annual EDM festival will feature 170 acts over the three shows, said BEPC Tangent, the festival’s organizers, on Tuesday.

A pre-concert will be held at Jamsil Olympic Stadium in southern Seoul on April 30, to coincide with the ABB FIA Formula E Championship.

The first main festival will follow on May 30 and 31 at Seoul Land, an amusement park in Gwacheon, Gyeonggi, from 2 p.m. to 10:30 p.m. The second main festival is scheduled at the same location on June 6 and 7.

This year’s lineup will be announced soon, the agency said.