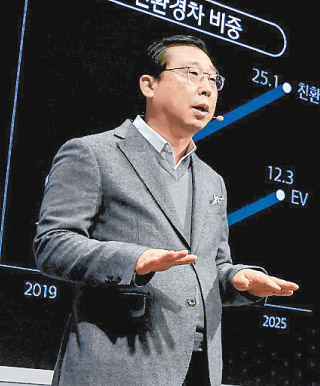 Starting with an electric-only model this year, Kia Motors plans to release 11 EVs by 2025, ranging from passenger cars to SUVs.

The aim is to generate 25 percent of its annual vehicle sales from eco-friendly cars and achieve a 6.6 percent share in the global EV market by that year.

“The car industry is going through a rapid paradigm shift, and for Kia, this is an important time to transform into a global player,” said company CEO and President Park Han-woo at CEO Investor Day held in Yeouido, western Seoul, on Tuesday. “We will lead innovation instead of adjusting to it to leverage this opportunity for a big leap.”

The two main elements of Kia’s initiative are EVs and mobility services.

EVs released by Kia Motors to date were simply electric versions of its gasoline-powered models, like the Soul, Niro and Ray. But this year, the carmaker will be offering a brand new, electric-only model for the first time - a crossover SUV that can run up to 500 kilometers (311 miles) on one charge.

The company is aiming to produce 50,000 EVs and one million eco-friendly cars annually by 2026.

For the cars of tomorrow, it is contemplating new business models. The company is exploring a subscription model, battery rental programs or the recycling of old car batteries into energy storage systems.

For mobility services, Kia is partnered with car-sharing start-ups in Asia, like Singapore’s Grab and India’s Ola.

In September 2018, it established the WiBLE car-sharing service in Madrid in partnership with Repsol, a Spanish energy company.

In its blueprint for mobility services, Kia Motors plans to lead the purpose-built vehicle (PBV) market. Hyundai Motor, which owns 33.9 percent of Kia Motors, has also mention PBVs in its plans for the future.

These vehicles can be modified for a wide range of uses, and Kia envisions them being tasked with unmanned delivery or being customized as robot taxis.

The company sees the capital needed for these investments coming from increased profitability in the selling of internal combustion vehicles. It plans to increase the ratio of SUV sales to total sales to 60 percent, China excluded, from the current 50 percent by 2022.