Director Bong Joon-ho’s “Parasite” continues to rewrite the history of Korean cinema after being nominated for six Academy Awards on Monday evening.

Maybe the news of the nomination was hinted when John Cho, a Korean-American actor, was one of the presenters announcing the nominees - and pronouncing the Korean names correctly - at the Samuel Goldwyn Theater in Beverly Hills, California.

Whether or not it was intentional, “Parasite” was called out last in all six categories it was nominated for: Best Picture, Best International Feature Film, Production Design, Directing, Film Editing and Original Screenplay, keeping those tuning in to the livestream in Korea at the edge of their seats.

“I feel it’s like ‘Inception,’” Bong told American media outlet Deadline on Monday. “Soon I’m going to wake up and realize this was all a dream, I’m still in the middle of ‘Parasite’ and all the equipment is malfunctioning […] But right now, everything is great and I’m so happy.”

“Parasite,” a suspenseful tragicomedy shedding light on the universal problem of class division portrayed through two families, has resonated with audiences all around the globe.

After receiving the Palme d’Or at the 72nd Cannes Film Festival, the festival’s highest honor, the film was invited to over 50 international film festivals, taking home 16 awards along the way. The film has also been honored by film and critics associations around the world, taking home awards in categories like Best Director, Best Screenplay, Best Foreign Language Film, Best Actor and more.

With all of the accolades “Parasite” has received over the year, many anticipated that the film would be nominated for Best International Feature Film, especially after the film was shortlisted for the category last month. But six nominations was a far cry from what many in the local film industry had expected.

Korean films began knocking on the door of the Academy Awards 58 years ago. In 1962, local film “The Houseguest and My Mother” by director Shin Sang-ok was submitted as Korea’s first contender for the Best Foreign Language Film category, and it took until last year, with “Burning” by director Lee Chang-dong, for a Korean film to be shortlisted for the award. Though its inclusion on the shortlist was an achievement for Korean film, “Burning” failed to make the final list of nominees.

“Parasite” wasn’t the only Korean film recognized by the Academy on Monday either. Director Yi Seung-jun’s short documentary film “In the Absence” was nominated in the Documentary (short) category as well. 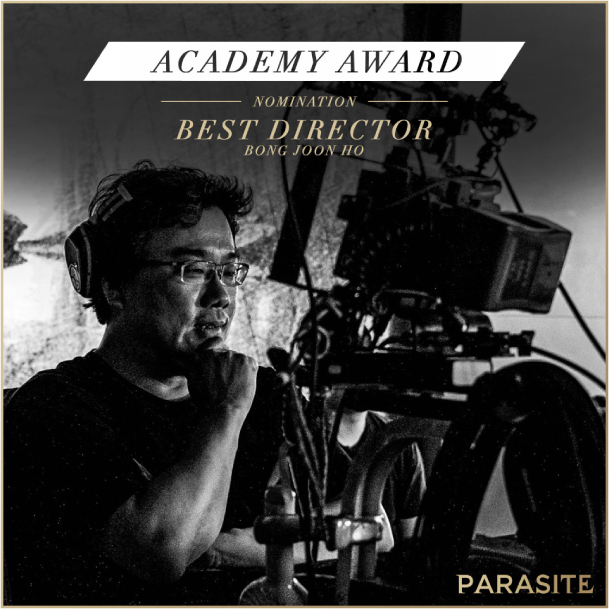 While the nomination for Best International Feature Film was expected, the other five nominations for “Parasite” were a surprise for many. The 92nd Academy Awards will take place at the Dolby Theatre in Los Angeles on Feb. 9. [NEON]

Why now? Why “Parasite”?

When asked by The New York Times why the film and Korean cinema is having such a breakthrough moment, Bong humbly replied that the success of his film did not spring from out of the blue.

“Korean cinema has a very long history, and ‘Parasite’ is a continuation of all the Korean films that came before,” Bong commented. “Park Chan-wook’s ‘The Handmaiden’ won a Bafta, and last year ‘Burning’ was a part of the shortlist […] So all of these developments over all of these years matured to lead to ‘Parasite’ today.”

But the uncomfortable yet deeply rooted social malaise of wealth disparity has been discussed over and over again in various films, so why are international audiences so wild about Bong’s film?

“The fact that it is such a prevalent topic may be one of the reasons why it struck a chord,” said film critic Kim Young-jin. “The way the film structures the story is different from others. Instead of having two sides clash against one another, it’s about one living off the other. That’s a fresh perspective that global audiences have not seen.

Film critic Hwang Jin-mi agreed that the film’s story offers a unique perspective that distinguishes it from Hollywood films.

“The film’s ending is different from what Hollywood audiences are familiar to,” Hwang said. “The film starts off lightly enough, and it’s funny at first, but [as the story develops] it’s somewhat chilling. And there’s no real evil in the film as well. In Hollywood films, there is at least some categorization of what is good and bad.

“The film is also very kind, very easy to understand,” Hwang added. “The cinematic grammar is very simple - the distinctions between the two families are shown in parallel, a clear comparison explained through various metaphors and representations. Still, the film’s narrative is different from a majority of Hollywood films.”

During an interview with American entertainment media outlet Vulture last October, Bong was asked to give his opinion on the fact that no Korean film had ever been nominated for an Oscar despite the country’s active pursuit over the past two decades. The answer from the director was a punch in the gut to many in the American movie industry and immediately went viral online: “It’s a little strange, but it’s not a big deal. The Oscars are not an international film festival. They’re very local.”

“I think everyone is overreacting to the news,” Kim pointed out. “The Academy members are mostly retired or nearly-retired American filmmakers and film industry insiders. It’s not an international film event like Cannes. It’s a form of American award ceremony that entertains viewers with its program structure of announcing the nominees and award recipients [during a] live show.”

“American audiences usually aren’t that interested in foreign films, especially Asian ones,” Hwang said. “But I think they perceived the story as interesting because Korea’s high-class lifestyle is very similar to theirs. What Korean society considers elegant and refined - such as studying abroad in the United States and acquiring a college degree there - is familiar to them. On the other hand, they’re also able to indirectly experience how the lower class lives in Korea, which can be related to their racial problems or immigrant issues.”

But Kim evaluated that if “Parasite” receives an Oscar - or possibly several Oscars - it would set a new precedent for influential Korean directors.

“Korean directors such as Bong Joon-ho and Park Chan-wook are already recognized by the global film market for their cinematic and artistic qualities,” Kim said. “But they’ve remained in the non-mainstream group until now. If Bong receives an Oscar next month, then his value in the western film industry would escalate considerably.”