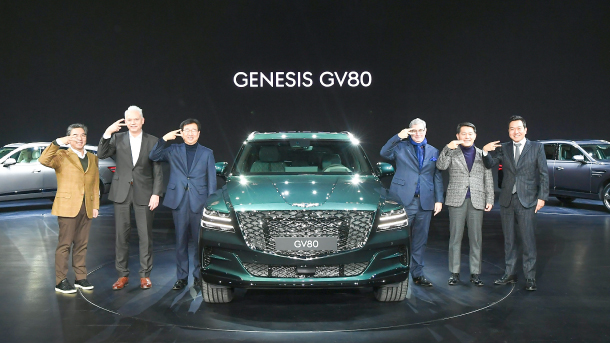 Hyundai Motor CEO and President Lee Won-hee, third from left, and other top executives pose in front of the GV80, the luxury brand Genesis’s first SUV, at the Kintex convention center in Goyang, Gyeonggi, on Monday. The vehicle started sales in Korea the same day. [HYUNDAI MOTOR]

The launch marks the brand’s debut in the SUV segment, the fastest-growing automotive category in Korea and globally. Genesis’s previous launches - the G70, G80 and G90 - were all in the luxury sedan segment.

In the design, the vehicle’s front has a large mesh-like “crest” grill and two thin strips of “quad” LED lamps on each side. Combined, the pentagon grill and the lamps are made to resemble Genesis’s emblem. The two slim LED lights are repeated once again at the back of the vehicle.

As with Genesis sedans, the SUV was carved with the “parabolic line” along the side that starts from the rear lamps and extends beneath the windows to the vehicle’s back. Hyundai explained it focused on a minimal interior design for infotainment and air ventilation controls - with a wide 14.5-inch screen sitting on top of the deck. 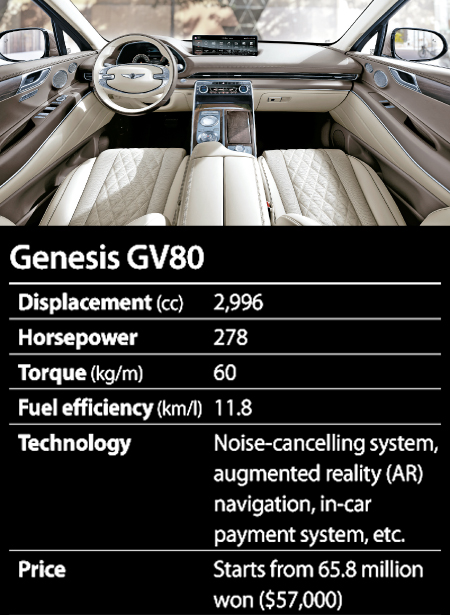 The GV80 will also provide an opportunity for Hyundai to debut several new state-of-the-art features. An upgraded version of Hyundai’s Highway Driving Assist system, dubbed the HDA II, can self-drive to switch lanes at speeds higher than 60 kilometers per hour (37 miles per hour) and helps maintain distance with a vehicle abruptly entering the same lane during traffic jams.

A new electronic suspension control uses a front camera to reduce the impact on the driver and passengers. The noise-canceling feature also made its debut inside the GV80, which presents an audio system that generates offsetting sound waves. New machine learning software can accumulate information on driving style so that the SUV can mimic it during assisted driving. In the infotainment sector, an augmented reality navigation system offers direction guides on top of a real-life image projected through a front camera.

The 3.0-liter diesel SUV starts at a price tag of 65.8 million won ($57,000). Models with 2.5?liter gasoline and 3.5-liter turbo engines will come later on, Hyundai said. The SUV has a rear-wheel drive system and a fuel efficiency of 11.8 kilometers per liter. GV80 comes in 11 exterior colors including black, green, white, silver and blue and five interior options.

“Our goal this year is to sell 24,000 units [domestically] - this will establish our position in the domestic luxury car market,” said Chang Jae-hoon, Hyundai’s executive vice president in charge of local business.

The recreational vehicle was one of the most anticipated releases in the Korean car market since last year. A launch date was originally set for November last year but was postponed due to internal issues.

The total number of vehicles sold by five Korean carmakers in 2019 slipped 0.8 percent on year, but even amid that retreat, SUV sales grew 10.7 percent on year. SUV sales accounted for 51.9 percent of Hyundai’s overall vehicle sales last year.