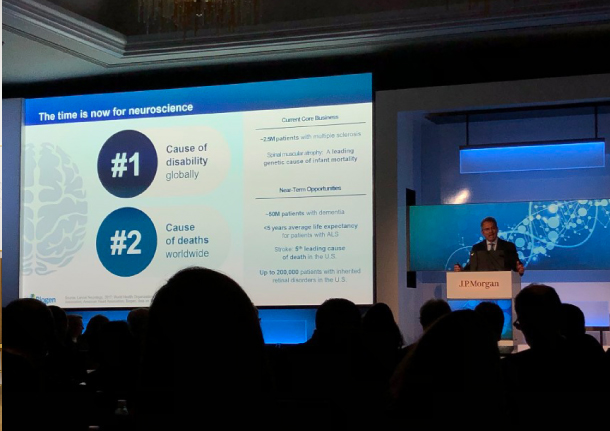 Biogen CEO Michel Vounatsos speaks Monday on the progress of aducanumab, an Alzheimer’s treatment, during the company’s presentation at the J.P. Morgan Healthcare Conference held in San Francisco. [KO JUN-TAE]

SAN FRANCISCO - With the J.P. Morgan Healthcare Conference half done, one fact is becoming increasingly clear. Pharmaceutical development is very much a matter of scale, money and sheer mass, and Korean players are just not there yet.

But it is also becoming apparent that the Korean companies are gaining recognition in the business and are carving out a promising business for themselves in biosimilars and other supporting roles.

As the giants commit billions, they commit millions.

On the first day of the conference, the Grand Ballroom at the Westin St. Francis hotel in San Francisco was abuzz as Biogen took the stage to detail the progress of aducanumab, its anticipated Alzheimer’s treatment candidate.

Even though the company has yet to file an application with the U.S. Food and Drug Administration (FDA) for aducanumab, CEO Michel Vounatsos said Monday that Biogen has already developed a “go-to-market model” for the United States.

“I clearly believe that Biogen is facing an inflection point with many near-term opportunities, obviously in the field of Alzheimer’s disease with a decision to file,” Vounatsos said.

If approved, aducanumab will become the first authorized therapy in the world for Alzheimer’s, which was seen in more than 5.8 million Americans of all ages last year.

According to the CEO, Biogen has plans for a “state-of-the-art” manufacturing facility with “unlimited capacity” supported by “top talent” for the rollout. The company is engaged in conversations with pharmacoeconomists, future customers and industry sources to nail down aducanumab’s price level.

Biogen executives said the company is also working with health authorities in Europe and Japan to introduce the medicine. It shocked the industry in October when it resurrected aducanumab, which initially disappointed in Phase 3 clinical trials, as new analyses from the company found that the drug still seemed to work when injected in high doses.

In restarting Alzheimer’s treatment development, the company regained billions of dollars in value that vanished when investors rushed for the doors after the initial Phase 3 trials.

Gilead Sciences said in its presentation session that the company’s H.I.V. treatment business has been seeing an average of 14 percent annual growth since 2011. It expects its tablet-delivered Biktarvy to remain the preferred treatment option for the majority of H.I.V. patients through 2033.

Roche Pharmaceuticals CEO William Anderson said Tuesday during the company’s session that it is on track to develop therapies for various neurological disorders, including Huntington’s disease and Alzheimer’s.

Biogen, Roche and Gilead Sciences are just a few of dozens of traditional biopharmaceutical multinationals from Europe and the United States geared toward dedicating years of research and billions to targeting the yet-to-be-tackled market.

In that same year, Korean biopharmaceutical companies poured in less than a 10th of what these companies spent, showing how the gap between the domestic industry and global counterparts may not narrow down anytime soon.

According to market data, Celltrion in 2018 spent the most among Korean biopharmaceutical companies, with a total of 288.8 billion won ($250 million) for R&D, followed by Hanmi Pharmaceutical, with 192.9 billion won, and Green Cross, with 145.9 billion won.

“But the growth potential of the domestic health care industry has been gaining attention and more funds as a result, so the value of a biotech company is now reflecting its global growth potential.”

Rodolfo Savitzky, chief financial officer for Lonza Group, one of the key competitors for Samsung BioLogics, said he considers the Korean contract development and manufacturer as a “serious player” and that the company is “closely watching” its development progress.

Samsung BioLogics could find additional contract production volume depending on the FDA results for aducanumab, as Vounatsos said the company is actively looking for partners.