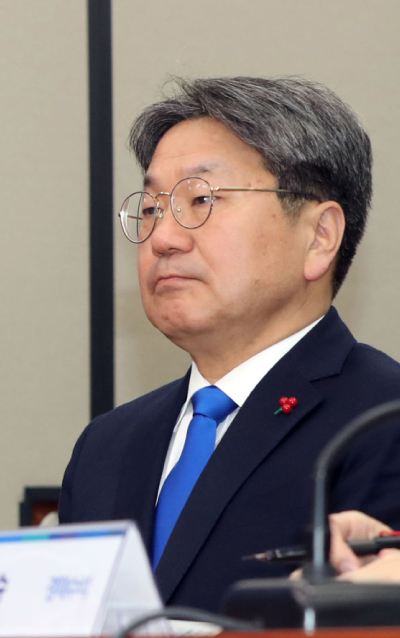 “Gangnam areas are the target,” Kim Sang-jo, presidential chief of staff for policy, said in a radio interview in the morning. “From now on, the government will consider all possible policy measures and use them aggressively and swiftly whenever necessary.”

Around the same time, Kang Gi-jung, senior presidential secretary for political affairs, said in another radio interview that the Blue House is preparing stronger measures. “The government must listen to the argument that a system where permission is required for real estate properties’ transaction should be introduced to control the people who use properties as a means of speculation,” Kang said.

Kang was referring to a system where a house owner is required to obtain permission from the central government or a local autonomous government to buy or sell his or her property. The idea was reviewed in 2003, the first year of the Roh Moo-hyun administration, but shelved due to the possible unconstitutionality. Land Minister Kim Hyun-mi recently dismissed the possibility of the permission system, saying, “There will be serious uproar if we introduce it.”

Both presidential aides were following up on remarks made by President Moon Jae-in on Tuesday during the New Year’s press conference. “I will restore the real estate prices to where they were,” Moon said. “I will endlessly present stronger measures.”

The LKP attacked the Blue House, particularly Kang’s idea. “This is communism,” said Rep. Kim Hyun-ah, a spokeswoman of the LKP. “The government is trying to act like the ‘big brother’ of the real estate market.”

“The Moon administration’s real estate policy is going insane,” Rep. Kim Sung-won, another spokesman of the LKP, said. “[Kang] is wielding a sword. This is extremely bad propaganda to split the public before the election.”

The LKP is welcoming the controversy surrounding the Moon government’s policy on real estate market, one of the most volatile issues in Korea, ahead of the April general election. Although the Moon government has issued a series of strong regulations to stabilize the housing market, prices are still rising.

“The government is repeatedly saying it will stabilize the market,” said an LKP official. “That means its past measures have all failed. The expanding controversy will highlight this administration’s incompetence.”

Another LKP official told the JoongAng Ilbo that the government measures are all linked to a tax hike. “I have never heard of a strategy of a massive tax hike ahead of an election,” he said.

As criticism grew fierce, the Blue House began damage control. A senior presidential aide flatly denied that the Blue House is pushing forward a policy to introduce a system where property sales and purchases require permission from the government.

“It was Kang’s personal opinion,” he told reporters later in the day. “We have not reviewed such a system and pushed it forward as a policy.”

“Kang was talking about her personal opinion that the government should pay attention to such an argument,” he said. “Kang was speaking to stress that the government has strong determination. For such an idea to be reflected into policy, it has to go through a more meticulous discussion process."