Sanctions up pressure on North

Sanctions up pressure on North 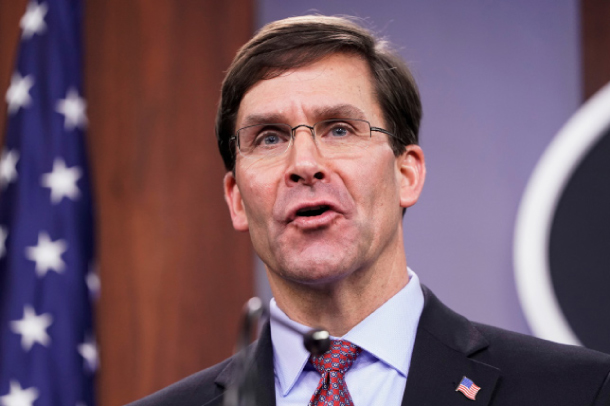 The same day, at a meeting with Japanese Defense Minister Taro Kono, Esper reaffirmed the “U.S. commitment to the full implementation of [U.S.] President Donald Trump and Chairman Kim’s joint statement at the Singapore summit,” which includes North Korea’s denuclearization, but later added Washington continues to believe the best path toward that goal lies in diplomacy.

The Treasury sanctions appeared to be an attempt at applying further pressure on Pyongyang to force it to return to negotiations, which are deadlocked over sanctions relief demanded by North Korea.

According to a press release by OFAC, the new sanctions apply to a North Korean trading corporation and a China-based North Korean lodging facility used to export labor and generate income overseas, which violate sanctions outlined by United Nations Security Council Resolutions 2375 and 2397.

The latter resolution obligated UN member states to expel all North Korean laborers by Dec. 22, 2019, and the new Treasury sanctions were meant to enforce such commitments, the OFAC press release read.

The North’s Namgang Trading Corporation, OFAC said, was responsible for coordinating logistics to send North Korean laborers to places like Russia, Nigeria and various countries in the Middle East, handling their visas, passports, departures and overseas employment. The company was also in charge of repatriating workers’ earnings to North Korea, “some of which are routed directly back to the Government.”

Yet by singling out a facility in Beijing’s Chaoyang District and noting the Namgang Trading Corporation’s dealings in Russia, Washington’s newest sanctions serve as pressure on North Korea’s closest allies in China and Russia to comply.

North Korean overseas laborers have been viewed as a lucrative source of foreign currency for the cash-strapped regime, and their repatriation was part of the international community’s push to cut off funding for the North’s weapons of mass destruction.

A UN estimate in 2017 indicated there were over 100,000 North Korean laborers working overseas said to have earned annually $500 million. Most of these workers, who often work long hours for low wages, are based in China and Russia, so these countries’ active implementation is crucial for the effectiveness of the sanctions.

In a speech delivered in San Francisco on Monday, Pompeo stressed that “America doesn’t pose a security risk to the North Koreans” but justified U.S. and other international sanctions on the North as having “caused Chairman Kim [Jong-un] to think seriously about the right path forward for his people.”

China also featured prominently in the remarks from the secretary, who stressed that if not all parties in the region cooperated with the pressure campaign against the North, “certainly the border countries, the primary border countries of North Korea - it’s unlikely [denuclearization] will happen as a result of only efforts of the United States.”

From Pyongyang, which has labeled Washington’s refusal to grant sanctions relief before seeing significant steps from the North toward denuclearization as a “hostile policy” undermining the regime, the OFAC sanctions could prompt strong protests or provocations in the form of weapons tests that Kim alluded to at the end of last year.