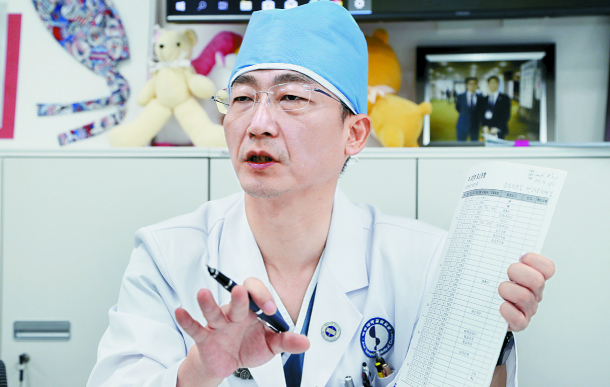 Dr. Lee Cook-jong, the celebrated head of Ajou University Hospital’s trauma center in Suwon, Gyeonggi, says he couldn’t admit any patients on about 63 occasions last year due to the hospital’s uncooperative attitude toward assigning beds during an interview with the JoongAng Ilbo last October. [JOONGANG PHOTO]

Lee, who returned to the naval port in Jinhae District, South Gyeongsang, on Wednesday after two months of the Korean Navy’s cruise training, told the JoongAng Ilbo Wednesday that Ryu’s verbal abuse was unacceptable given Lee’s position as head of the trauma center.

The allegations of verbal abuse, which were first reported by local broadcast network MBC on Monday afternoon, follow a revelation by Lee last October that he was unable to treat patients due to the hospital’s uncooperative attitude toward assigning beds for his center’s patients.

During an interview with the JoongAng Ilbo, Lee said he sent “bypass” notifications, which are notices sent by hospitals to the National Fire Agency to prevent additional patients from being admitted as no beds are available, about 63 times. The 63 bypass notifications mean that the center was technically shut down for 886 hours, or nearly 36 days.

Ajou University Hospital’s trauma center has 100 beds, the largest number among all trauma centers across the country and received about 6.6 billion won ($5.7 million) from Korea’s government last year.

But Dr. Lee claimed the hospital won’t assign beds for the trauma center’s patients even though their main building had beds available.

“Under the rules of Ajou University Hospital, they should accept our center’s patients when we don’t have a bed available,” Lee said. “However, they violated the rule.”

“The hospital never accepts our patients although beds in their main building were empty,” Lee said. “I begged them so many times. If they don’t allow our center to use their beds, we can’t accept patients who are in emergency situations.”

In response to Dr. Lee’s claims, Ajou University Hospital strongly argued that Lee’s claim is a misrepresentation and that it has been trying its best to accept the trauma center’s patients.

“We have about 750 beds available excluding some special rooms used by the departments of psychiatry and behavior. A total of 42 departments have to share the 750 beds,” Han Sang-uk, director of Ajou University Hospital said. “We have been assigning a number of beds to the trauma center even though we are going through a hard time as well. We must leave some beds empty in case of emergency patients.”

“A large number of patients have been visiting the trauma center since we got an air ambulance in August 2018. I just asked Lee to follow the rules as we have been suffering due to the insufficient number of beds,” Han added. “We are not able to accept more patients unless people with minor illness are discharged from the hospital. Dr. Lee is making an argument concerning only his perspective.”

Officials from the Ministry of Health and Welfare visited Ajou University Hospital in November last year and requested a more stable process of assigning patients.

“We must come up with an alternative unless the hospital solves the problem [of assigning patients from the trauma center] wisely,” said an official from the Ministry of Health and Welfare.

Since the ministry’s recommendation, the number of bypass notifications sent by the trauma center to the National Fire Agency has decreased.